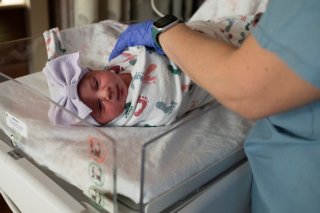 In Germany, the national government has introduced a number of family policies over the past fifteen years to tackle its below-replacement fertility rate, including raising the parental leave allowance to two-thirds of income for the first year (along with two extra months that can be taken by both parents at the same time). In Poland, the national government has been offering family-friendly policies to increase fertility rates for the past six years. For example, in May 2021, the Polish national government expanded its “Family Care Capital” program to give extra, tax-free money to families that had more than one child.  Likewise, in 2019, the Hungarian government of Viktor Orban initiated a Family Action Plan, a seven-point policy which devotes 4.8 percent of Hungary’s gross domestic product (GDP) to government programs to support families and encourage childbirth. China’s government passed a new law in August 2021 instituting a three-child policy for each family. According to China’s National Bureau of Statistics, the number of newborns fell for the fifth consecutive year to 10.62 million in 2021, barely outpacing the 10.14 million deaths.

One of the biggest risks to civilization is the low birth rate and the rapidly declining birth rate. So many people, including smart people, think there are too many people in the world and the population is growing out of control. It’s completely the opposite. Please look at the numbers. If people don’t have more children, civilization is going to crumble. Mark my words.

“Future generations have broader shoulders in the sense that they’re capable of supporting more dependents,” said Erich Striessnig, professor of demography and sustainable development at the University of Vienna.

According to Striessnig’s calculations, the fertility rate could fall to 1.5 before the cost of an aging population becomes a societal problem. That “societal problem” has either arrived or is on the verge of arriving in upcoming years. The European Union is averaging 1.5 births per woman now. The United States is only marginally better, at 1.64 births per woman. Countries such as Australia, China, New Zealand, and OECD members all lag closely behind the U.S. with 1.7 births per woman.

Higher education is often billed as the “the great equalizer” for U.S. women, but that ship has sailed. During the 2020-21 academic year, women made up 59.5 percent of college students, an all-time high, and men 40.5 percent. However, who is to say that these women will enter the workforce in occupations and areas of the economy where there are shortages of much-needed, qualified employees? And what of addressing the growing disparity between male and female enrollment in higher education?

Family-friendly policies, such as low-cost or no-cost preschool child care support, or encouraging fathers to take a greater role in child-raising, may have an impact on encouraging more women to enter the workforce. The family cost of quality preschool child care support for one child is already high. Add a second preschool child and it can become financially prohibitive for a woman to re-enter the workforce. Yet, in August 2019, Gallup surveyed Americans on their preference to work outside the home, and 50 percent of mothers of children under eighteen years of age responded that they prefer to stay at home and take care of the house and family. More specifically, two-thirds of mothers who were not employed and have minor children prefer to stay at home, but 57 percent of mothers who are employed and have minor children prefer to work outside the home. While certain family-friendly policies may encourage more women with children to enter the workforce, these poll results show a large percentage of American women have made a conscious choice to focus on home and family rather than enter the workforce full-time. This segment of the potential workforce will not likely offset declining U.S. birth rates.

What national response has there been to this “demographic time bomb?” Adjusting U.S. immigration policies would be one potential solution. More than one million legal immigrants enter the United States annually. During the first year of the Biden administration, the Center for Immigration Studies reports that its de facto “open borders” policy has accounted for an all-time national record of 1.97 million Border Patrol apprehensions in a single year, with an estimated 500,000 more non-apprehensions. A reevaluation of the legal immigration process could adjust upward the number (and skill quality) of new immigrants. Likewise, further private sector efforts at encouraging family-friendly policies—assisting in child care solutions, home-based work arrangements, and part-time, job sharing positions—can be adopted to encourage more women in the workforce. Lastly, with labor shortages becoming a “new normal” in America, consideration of enacting a Universal Basic Income program should be placed on public policy hiatus until we see empirical evidence of automation (or artificial intelligence) creating permanent, structural unemployment.

Thomas A. Hemphill is David M. French Distinguished professor of strategy, innovation, and public policy in the School of Management at the University of Michigan-Flint.