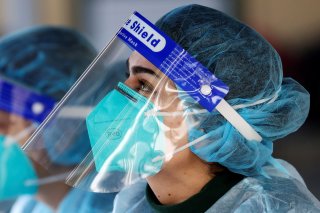 The People’s Republic of China has a documented synergy between its biotech industry and its military developments in biowarfare. Its national strategy essentially lowers the barriers and increases cooperation between the private and civilian sectors with their military one, commonly referred to as military-civil fusion. This was known prior to the unleashing of the coronavirus.

Whether it was accidental or intentional, the misinformation campaign advanced by China’s leadership still doesn’t override the damage this virus has wrought globally. It cannot be forgiven. Upwards of 181,000 Americans have died and nearly six million have been infected. As the Congressional Research Service finds, the pandemic has laid bare the fragility of our distributed, global supply chain, especially to China. Moreover, the coronavirus has proven that our medical supply chain is a national security asset. Why shouldn’t medical supplies be treated any different from drones, 5G technologies, quantum advancements, or artificial intelligence?

Josh Rogin recently pointed out in a Washington Post op-ed that Americans should not be indirectly subsidizing China’s military expansion and aggression by investing in Chinese financial markets. The same is true about critical medical supplies.

Why should Americans continue to send dollars to China as payment for medical supplies and pharmaceuticals when some of these funds may be funneled into Chinese companies co-developing biowarfare capabilities? Or perhaps used to play favorites by doling life-saving medical supplies like personal protective equipment, ventilators, or masks to smooth over or build relations—termed Mask Diplomacy?

Even back in 2009, there was concern that China might retaliate against the Obama administration for holding Chinese firms accountable for contaminated drugs while Sen. Sherrod Brown (D-Ohio) warned that “the lack of regulation around outsourcing is a blind spot that leaves room for supply disruptions, counterfeit medicines, even bioterrorism.”

The steady off-shoring of America’s pharmaceutical manufacturing did not happen overnight and did not necessarily all go to China. Yet, merely shifting production out of China to say India, another larger and active medical supplier for Americans, will not adequately protect America either. Ostensibly, it would make our already fragile medical supply chain more tenuous by effectively putting even more eggs in another, now larger basket.

Indeed, the supply chain is so broad that Sen. Marco Rubio (R-Fla.) and Sen. Elizabeth Warren (D-Mass.) introduced a bill in July to get to the bottom of America’s over-reliance on foreign-made pharmaceuticals. One key component of this bill would eliminate current legal challenges that allow medicines to “qualify” as American-made for purchase even if they are only ‘finished’ in America. If this bill were better wedded to the longstanding Buy America Act, it would send a strong signal to domestic producers that America is firm in treating its medical supply chain as a national security issue.

But as the pandemic makes painfully clear, it is more imperative than ever to bring some of our know-how and production capabilities back home. Luckily, America is already on that path.

One step was taken in May in a partnership between the U.S. government and a Virginia bio-tech start-up that adds critical medical ingredients to medical strategic reserve, known as the Strategic Active Pharmaceuticals Ingredients Reserve or SAPIR, and is similar to what America has done with oil.

A second step occurred a few weeks ago when the Trump administration issued an Executive Order aimed at domestically producing essential medical supplies.

A third, much-needed step would be to source medical supplies within America for those that serve in the armed forces. This would both further our national security, enhance domestic production, and add resiliency to our medical supply chain.

In fact, the Pharmaceutical Independence Long-Term Readiness Reform Act, which has been languishing in the House Armed Services Committee since November 2019, seeks to do just that. The bill is intended to not only identify America’s medical supply chain risk but also seek more resilient supply chains. Given the recent pandemic, the bill was strikingly prescient in that regard. More importantly, the bill directs the Department of Veterans Affairs and the Department of Defense to procure only FDA-approved, American-made ingredients, medicines, and vaccines for American troops and veterans.

American needs a more resilient and safe medical supply chain—at least for those that have or are currently protecting America’s freedom and liberties—its military personnel and veterans.

These are all steps to making America safer, but more action will be needed in the future. America needs to synergize and reinvigorate our own domestic capabilities with an eye to national security just as the Chinese do theirs.

Wilson VornDick is a China, national security, and emerging technologies expert at RANE and Duco.