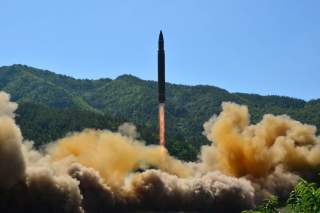 On the morning October 16, 1963, Dr. Ray S. Cline, then Deputy Director of the CIA (and later one of my professors at Georgetown University), briefed National Security Advisor McGeorge Bundy and Attorney General Robert F. Kennedy on the first conclusive intelligence assessments that the Soviet Union was placing nuclear-armed medium range ballistic missiles (MRBMs) in Cuba. Cline would later recount in a memo for the CIA “off the record” that RFK’s “…initial response was one four-letter word….”

RFK's appropriate alarm would help guide his brother President John F. Kennedy's response to the now famous Cuban Missile Crisis, a confrontation resulting in Nikita Khrushchev's withdrawal of his nuclear missiles from Cuba. For America, this crisis proved that with determination it could prevail over the Soviets without recourse to nuclear war, as it forced an embarrassing setback that would soon cost Khrushchev his job, and on balance, strengthened the credibility of U.S. leadership during the Cold War.

But what if in that early morning meeting, RFK had retorted that Cline’s conclusions did not indicate aggressive Soviet intent and that they should be ignored given more serious U.S.-Soviet concerns, thus allowing Cuba to retain its Soviet nuclear missiles? After all, JFK’s and RFK’s leadership and resolve likely helped prevent additional Soviet nuclear proliferation, blackmail leverage over myriad U.S. defensive initiatives and a later real nuclear war over Cuba.

Starting in the late Summer of 2011, Washington faced a similar “Cuban Missile Crisis”-like challenge from China, which provided technology for North Korea’s nuclear-armed intercontinental ballistic missile (ICBM) program, but—in contrast to Kennedy—the public record indicates the Obama Administration did nothing. The result is that thanks to China’s help, North Korea will soon be able to mount surprise nuclear attacks against American cities. Pyongyang, and its main missile technology partner, China, will have new horizons for nuclear blackmail, nuclear weapons proliferation, and for undermining U.S. alliances in Asia. All of this will advance the Chinese Communist Party’s (CCP) goal of supplanting American global leadership and containing democracy.

China's direct assistance to North Korea's nuclear missile program, according to Japanese press reports, was observed by American and Japanese surveillance satellites in the late Summer of 2011. This was then revealed to the world for the first time on Pyongyang's April 15, 2012, military parade. China had transferred to North Korea some six to ten of its China Aerospace Science and Industry Corporation (CASIC) sophisticated sixteen-wheel missile transporter erector launchers (TELs), based on its WS51200 vehicle.

By the Summer of 2012, Japan’s Asahi Shimbun was reporting that the Obama Administration had told Tokyo not to protest this transfer. Possibly, Obama had been more concerned that then-Chinese leader Hu Jintao join his second Nuclear Security Summit held in South Korea in early April 2012. Obama could have earned Kennedy-esque praise had he used that summit to publicly call on Hu to immediately reverse his transfer of CASIC TELs. Instead, in a pivot from reality, he appeared to accept Chinese lies, inasmuch as an unnamed “senior official” told the New York Times on 20 April 2012, “We think this is poor Chinese performance in sanctions implementation, and not willful proliferation.”

To be sure, China's violation of United Nations sanctions barring missile technology sales and its transfer by sea of such large vehicles to the "Hermit Kingdom," could not have happened without the deep awareness of Chinese officials. But for the next four years, there was no public mention of China's TEL transfers by President Obama or National Security Advisor Susan Rice. In August 2017, Rice argued that the United States could “tolerate” North Korean nuclear weapons, perhaps an indication of a previous ambivalence toward China’s missile assistance. Obama certainly had the opportunity to mention the TELs to Xi Jinping, who attended Obama’s third and fourth Nuclear Security Summits in March 2014 and April 2016. But there is no public record of such, as perhaps by then gaining Xi’s cooperation with his Iran nuclear deal may have been a higher priority for Obama.

One is left to conclude that the Obama Administration's decision not to use its leverage in 2012 or in later years is primarily responsible for North Korea retaining its Chinese TELs. Furthermore, China was emboldened not just transfer more of them, but to also transfer to North Korea the ability to assemble its own large missile transporters. By 2013, one year after the second Nuclear Security Summit, the China National Heavy Duty Truck Group, "Sinotruck," had built a truck assembly joint-venture near Tanjung, North Korea.

It is also very likely that China is continuing to give new CASIC TELs to North Korea. Subtle differences showed up on the CASIC TEL first seen to carry the Hwasong-14 ICBM, in July 2016. When revealed after its November 28, 2017 launch, the CASIC TEL carrying the larger liquid-fueled Hwasong-15 had two additional wheels for a total of eighteen, a new cab structure, and a new double-hydraulic piston missile-elevating platform. It is doubtful that North Korea made these modifications; at a minimum, CASIC was responsible for their design if not manufacture.

There may also be Chinese assistance for North Korea's long-range missiles. This would be logical, as in-depth knowledge of North Korea's weapons would be necessary to design and build their TELs. By the mid-1980s China had designed but then decided not to make the world's first mobile liquid-fueled ICBM, the DF-14/22, so it could have shared that engineering work to support the development of the Hwasong-14 and 15. Also, in January 2017, Pakistan tested its possible three-warhead equipped ABABEEL MRBM, which has a bi-conic nose cone very similar to that of the Hwasong-14. Indian government sources assess that China gave Pakistan the multiple warhead technology tested in ABABEEL, and agree that given their longstanding missile cooperation, Pakistan could have transferred this multiple warhead technology to North Korea.

All of this means that when North Korea completes its testing program by demonstrating that its ICBMs can successfully deliver a nuclear warhead that survives the heat of atmospheric re-entry, they could also be able to conduct surprise nuclear strikes on the U.S., all thanks to their Chinese-origin TELs and MELs, and the Obama Administration’s free pass. It is estimated that the Hwasong-15 can launch nuclear strikes against all continental U.S. cities, while the Hwasong-14 may reach as far as Chicago. In addition, these ICBMs could soon be equipped with Chinese-enabled multiple nuclear warheads better able to evade existing U.S. missile defenses in Alaska and California.

The good news for the Trump Administration is that it may still have the time to orchestrate a "North Korean Missile Crisis" resolution with the goal of shaming Xi and the CCP leadership into taking back the TELs and MELs, before its ICBMs become operational. On October 13, 2017, the Treasury Department mentioned that a subsidiary of CASIC had transferred TELs to North Korea, as part of sanctions for that subsidiary's military technology sales to Iran. It is time to tweet, speak out at the United Nations, and then to sanction both CASIC and Sinotruck directly. This should be done in concert with a diplomatic campaign to persuade allies to do the same.

If this resulted in positive Chinese actions, it could reenergize the effort to denuclearize North Korea, which Administration officials acknowledged in early August is not making progress in the wake of the 12 June U.S.-North Korean Singapore Summit. It could also vindicate President Trump’s strategy of engaging Xi Jinping personally on North Korea. If China does not cooperate, the U.S. response should assign appropriate blame to China, highlight its role in helping North Korea to become a nuclear threat, and undermine China’s quest for regional and global leadership.

That Xi did not follow through on earlier reports that he was going to attend North Korea's seventieth Anniversary celebration on Sunday 9 September, and that Kim Jong Un was reluctant to show off his nuclear missiles and their Chinese TELs in his most recent parade, indicates that now may be the best time to unload sanctions against CASIC and Sinotruk.  This should be done with an accounting of the recent history of China's military assistance to Pyongyang and the other rogue regimes.  There will be little chance of advancing North Korea’s nuclear disarmament until the China-North Korea nuclear missile technology relationship is broken.  If it works, then President Trump will deserve credit for decreasing the chances of a nuclear war against North Korea that could quickly involve China. Should such a war could come to overwhelm U.S. forces, that could tempt China to attack Taiwan.