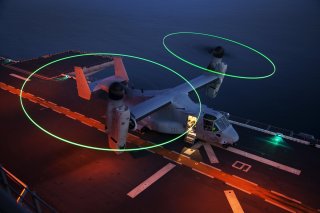 Citing the fast-growing Russian and Chinese threat, the U.S. Navy, Marine Corps, and Coast Guard document outlines could clearly be referred to as a “war attack” plan.

“Within the most contested battle spaces, we will destroy adversary forces by projecting power from attack submarines, fifth-generation aircraft, naval expeditionary forces, unmanned vehicles, and maritime raids,” the strategy writes.

Also of significance, the attack strategy explained in the document is by no means limited to kinetic effects and explosive weapons attacks but also cites jamming, maneuver and other defensive systems likely to include cyber resilience and deceptive tactics.

The strategy is also clear to point out that multi-domain attacks from different locations, angles and “axes” of attack will be employed to overwhelm, confuse and ultimately destroy an enemy. While there are of course key references to precision targeting, sensing and networking, the strategy does seem to incorporate multiple references to the use of high-volume, coordinated, multi-muntion attacks coming at one time.

Along with its emphasis upon major weapons systems, the strategy also includes references to how major war platforms and air-sea-land units such as Marine Corps expeditionary strike groups will figure into coordinated, multi-domain attacks.

As is the case with many vital attack strategies, and particularly those focused upon a high-volume of massive firepower in rapid succession, any major warfare campaign has to survive and sustain itself based upon logistics.

Finally, as part of its multi-faceted, multi-domain attack plan, the strategy naturally calls upon major involvement from U.S. allies.