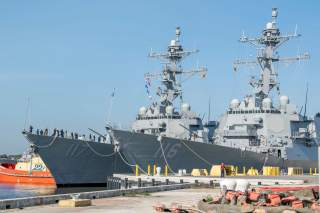 Key point: This upgrade will make the detection of targets easier.

Lockheed Martin is designing Aegis baseline 10 to be compatible with older variants AN/SPY-1 radars to backfit older U.S. Navy Burke-class destroyers, and to help foreign navies upgrade their systems to baseline 10. Flight III is the latest version of the Burke-class guided missile destroyer, and will be equipped for ballistic missile defense.

The system is built with individual building blocks called radar modular assemblies (RMAs), Raytheon officials say. Each RMA is a self-contained radar in a two-cubic-foot box; RMAs can stack together to form any size array to fit ship mission requirements.

For the Flight III Burke-class destroyer's SPY-6(V) AMDR will feature 37 RMAs. The new radar will be able to see targets half the size at twice the distance of today’s SPY-1 radar. The AMDR will have four array faces to provide full-time, 360-degree situational awareness. Each 14-by-14-foot face is about the same size as today’s SPY-1D(V) radar.

The AN/SPY-6(V) AMDR will 30 times more sensitive than the AN/SPY-1D(V) in the Flight III configuration, and is being designed to counter large and complex raids, Raytheon officials say. The new radar will have adaptive digital beamforming and radar signal processing for dealing with high-clutter and jamming environments.

The new radar will feature S-band radar coupled with X-band horizon-search radar, and a radar suite controller (RSC) to manage radar resources and integrate with the ship’s combat management system.

On this order Lockheed Martin will do the work in Moorestown, N.J., and should be finished by December 2025.