Aerial Killer: This Might Be the Most Advanced F-14 Tomcat Ever Built 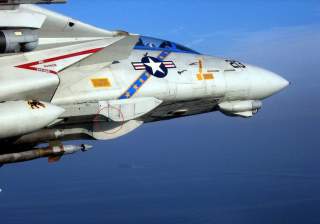 The photo in this post shows an F-14D Tomcat of VF-213 deployed with the carrier USS Theodore Roosevelt (CVN-71)flying with the Remotely Operated Video Enhanced Receiver (ROVER) system (whose blue transmit antenna is circled in red in the image).

ROVER allows ground forces, such as Forward air controllers (FACs), to see what an aircraft or unmanned aerial vehicle (UAV) is seeing in real time by receiving images acquired by the aircraft’s sensors on a laptop on the ground. There’s a little time delay and usage of ROVER greatly improves the FAC on the ground reconnaissance and target identification which are essential to close air support (CAS).

Within days of the modification teams arrival on the USS Theodore Roosevelt all F-14 Tomcats had complete ROVER capability. Before ROVER, ground controllers had to rely on “visual talk-ons” to hunt enemy ground forces and would use a map to guide pilots where they needed to go. According to a U.S. Navy news release, a joint VF-31/VF-213 investigation revealed that it would be possible to modify the F-14D Super Tomcat with off-the-shelf technology for only 800 dollars per aircraft.