On the Afghan Migrant Crisis: the EU Should Build Bridges, Not Walls 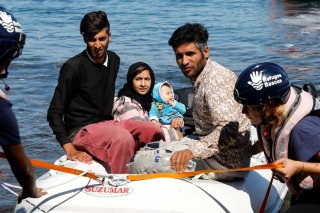 Just days after the beginning of the Afghanistan crisis, world leaders (though calling many of them leaders seems rather generous) were warning of the potential for an Afghan migrant crisis with hundreds of thousands, if not millions of people, fleeing the country—to either its immediate (and rather unstable) neighbors or to Europe.

With the French election months away and the German election mere weeks away, Europe’s most important countries risk having their politics derailed by this crisis. Macron, in particular, made this clear when he mentioned the need for an EU response to migration in his televised address on the day of Biden’s failed withdrawal.

These national leaders aren’t afraid of Afghan migration. They’re afraid of the political reaction to this migration. Whilst polls may show large majorities in most Western-European countries in favor of resettling significant numbers of Afghan refugees, our national leaders suspect this may prove to be a mirage. The closer we draw to elections, the less support migration will foster.

Accordingly, the EU has already sprung into action on a €600 million package to stem the flow out of Afghanistan. Pre-planning is wise, if it can be called pre-planning at this late time, but this money must be directed towards real assistance, not fences.

This time there must be no fortress, no barricades dividing Europe, no deals with dictatorships made to stem the migratory flow. Whilst in 2015 it may have been politically expedient to create these barriers to Europeanism, we must not repeat this. We cannot let the situation get to the point where walls are the preferred solution instead of the bridges we need.

Bridges, however, need to be anchored into the pre-existing ground—-the failure of politicians to anchor pro-migration politics in the culture is what risks the previous backlash. We need world leaders to show leadership, to proactively articulate why Afghan migration should be welcome. The greatest failure of 2015 was the assumption of long-term support. Proclaiming “Wir schaffen das” (We can do this) wasn’t enough then, and it won’t be enough this time. The message from our leaders today must consistently be “Wir sollten” (We should).

Most importantly, our leaders should make it clear that welcoming migrants is not just essential to preserving Europe’s collective morality, it’s also smart financial policy to welcome Afghans who are offering real bread-and-butter benefits to European citizens.

The relative demographic decline of Europe—and of Germany in particular—means an increasing strain on pension systems and, unless Modern Monetary Theory becomes au fait, it will necessitate drastic increases in taxes. There is however an alternative to raising taxes or cutting spending—that is to add a population of risk-taking, pro-liberty, working-age people to our societies. To prevent the 65 percent increase in the dependency ratio that’s currently forecasted, something has to change. And luckily, evidence from Germany shows change is on the horizon as pre-COVID Syrian migrants moved to plug a significant number of mid-skilled jobs in Germany’s hyper-tight labour market, becoming new taxpayers and allowing for Germany’s continued industrial success.

We must also remember that the political ramifications of 2015’s migratory wave have almost entirely passed with “Historian” Naill Ferguson’s prediction that the anti-migrant Alternative for Germany (AfD) would become the second-largest political party being not just disproven but exploded with the AfD now polling at a low fourth and having been trounced in several state elections. Indeed, it seems the only place where the ramifications are really being felt is in the column inches of the Express.

Another type of rhetoric our leaders need to counter is the notion that tough border policy stops migration and ultimately saves lives. The evidence from Italy is clear: the only demonstrable difference between Salvini’s Mediterranean drowning policy and the previous sea-shepherd policy is that deaths were exponentially higher under Salvini with no real change in migrant numbers.

The Mediterranean should remind us of exactly why we cannot turn our backs on Afghan migrants in the way that we have with their country. We have already seen the consequences of ignoring Mediterranean migration, and those consequences look like a watery graveyard with children’s bodies washing up on humanity’s shore. They look like seventy-one people dying like cattle in the sweltering heat of a smuggler’s truck.

What about concerns over the different values of the people coming to Europe? Will migrants accept the diversities we are rightly proud of? Our leaders should be quick to point out two things. Firstly, that few people share our values more than these migrants. They’ll include those who worked with the West to fight the Taliban, female Afghans who are finding their position in society regressing to the eighth century, and LGBTQ Afghans who face genocide.

Secondly, and most importantly, our leaders must reiterate that in trying to assess who fits our values, who “deserves” to come to Europe, we must hold fast to the values we are trying to defend. Angela Merkel summed it up best in 2015 when she commented that the barriers put up to ‘protect European freedom’ were akin to the barriers of the Warsaw Pact used to crush it.

Alexander Bowen is a Contributor for Young Voices, a Politics & Government student at SciencesPo Paris, and an EU Youth Ambassador.