The Afghan Taliban's War Against ISIS is Just Beginning 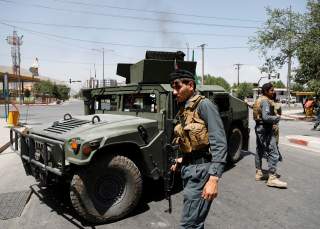 KABUL, AFGHANISTAN — This week was supposed to have been one of celebration in Afghanistan, as this nation of 32 million people marks the centennial of its independence from British rule. But tragedy struck just two days before anniversary observances.

A suicide bomber, allegedly a member of the Islamic State group, detonated a vest loaded with explosives in the middle of a wedding attended by more than 800 people on Saturday.

Even in this city plagued by years of violence, the attack in western Kabul was a horrific event, claiming the lives of at least 63 people and injuring hundreds more. As often is the case with terror attacks, the bombing struck fear in citizens across Afghanistan’s capital city.

“Ever since suicide bombings started here, I always feared that a wedding would be targeted,” said Parwin Popal, a Kabul resident. “Whenever I would go to weddings, I would think ‘now they’re coming’.”

Grief and disbelief were redoubled on Monday, when several bombs went off at restaurants and in public squares throughout the city of Jalalabad in eastern Afghanistan. That series of Independence Day attacks injured dozens of people, including young children. No one immediately claimed responsibility for the bombings.

Since the Trump administration first began face-to-face talks with the Taliban in Doha, there have been questions about what to do with fighters claiming allegiance to the so-called Islamic State group.

Nabeelah Baz, a parliamentarian from the eastern province of Nangarhar, says dealing with the Islamic State — also known as Daesh — may prove much more difficult than the Taliban.

“The attack on the wedding hall falls exactly in line with the Daesh motive, which is much more concerned with sectarianism than politics,” he said.

The difference between the groups is that: “The Taliban have a political claim, they say that they were a government that was overthrown from power.”

In the weeks leading up to Independence Day, extra security precautions had been taken. Festivities would have seen the reopening of a 20th century palace destroyed by years of war. But the wedding hall bombing took the violence to an unimaginable new level, prompting officials to cancel those events.

“They were told, ‘If you have your celebration, we will bring the shoes of every person killed or wounded in the attack to your palace,” said one official, who spoke on the condition of anonymity.

Afghanistan has been expecting news in recent days about an impending peace deal with the United States. The Taliban and Washington are said to be finalizing an agreement to end the United States’ 18-year incursion in the country.

U.S. President Donald Trump alluded to a possible impending agreement in a tweet sent the same day as the horrific attack.

“Just completed a very good meeting on Afghanistan. Many on the opposite side of this 19 year war, and us, are looking to make a deal — if possible!”

Zalmay Khalilzad, Washington’s chief negotiator with the Taliban, tweeted that the attack should prompt officials to “accelerate” their talks.

“We must accelerate the #AfghanPeaceProcess including intra-Afghan negotiations. Success here will put Afghans in a much stronger position to defeat ISIS.”

Nasrat Rahimi, spokesman for the Interior Ministry, said Saturday’s bombing served a brutal purpose. “The enemies of the Afghanistan want to incite fear in the Afghan people by showing their barbarism,” he said.

With that in mind, Rahimi said the Interior Ministry has instructed its forces to take even more precautions during upcoming holy days.

President Ashraf Ghani, meanwhile, pinned some of the responsibility for the attack, at least indirectly, on the Taliban. “[The] Taliban cannot absolve themselves of blame, for they provide platform for terrorists,”  he said.

For its part, the Taliban was quick to denounce the massacre, saying: “There is no justification for such deliberate and brutal killings and targeting of women and children,” however the group continues to stage their own attacks that are taking a mounting toll on civilian life.

Baz said this has made discussions with the Taliban possible, since they were able to designate elders and ex-officials that they claim speaks for the entire movement.

He also pointed to a demographic difference between ISIS and the Taliban groups. “When you see people who claim to be part of Daesh they are young boys from the universities and the high schools.”

The Taliban also are more likely to be students of religious schools, many of which are located in territories disputed between Afghanistan and Pakistan.

This, he said, makes the Daesh members much more ideological than the Taliban, and even more extremist.

This article originally appeared at ThinkProgress.