In Afghanistan and Beyond, America Overestimates Its Economic Leverage 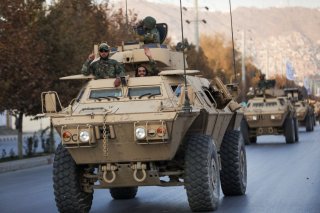 U.S. foreign policy remains under siege. America’s outdated thinkers, especially those who overestimate Washington’s economic leverage while grossly underestimating the will of adversaries, are still shaping U.S. foreign policy in the twenty-first century.

To illustrate this, consider what Ryan Crocker—the former U.S. ambassador to Afghanistan—said on October 21, 2021, to an audience at Texas A&M University: “We should do absolutely nothing on the developmental side [in Afghanistan]. That would simply support for and recognition of the Taliban regime.” Even on the humanitarian side, Crocker appeared hesitant and suggested that the United States should find a way to blame the Taliban for the suffering of the Afghan people.

Drawing on his twentieth-century experience, Andrew Natsios—the former head of the United States Agency for International Development—told students and scholars at the same venue that Washington should not provide humanitarian assistance to Afghanistan. “The United States does not provide humanitarian assistance, particularly in a civil war and a conflict to the government of any country,” added Natsios.

Be that as it may, it is naïve to think that Afghanistan is still in conflict. According to Western reporters who have traveled to Afghanistan in recent weeks and months, the country is now under the full control of the Taliban.

The draconian thinkers also see freezing Afghanistan’s national assets as a critical foreign policy tool against the new government in Kabul. While there is no credible evidence showing that the policy of freezing assets changes regime behavior, the policy is widely advanced to be effective against Washington’s adversaries.

In the case of Afghanistan, this view is more severely enforced. The more the new government in Afghanistan has begun to assume responsibility for delivering on the promises it made in the Doha Agreement, the more it has been pressed economically.

Advocates of economic sanctions have never justified whether or not sanctions work. Decades of experience show that sanctions have been counterproductive in many instances, including in Russia, North Korea, Iran, Syria, and countries in North Africa.

Traditionalists ignore the fact that sustaining biting economic sanctions against Afghanistan may not just diminish the trust Washington has built with the Taliban over several years, it could push political leaders in Kabul closer towards America’s real adversaries, among them: China, Russia, and Iran.

Moreover, the common thinkers forget that the solution to America’s problems in the twenty-first century may still lie in its humane values. These values are reflected by President Harry Truman: America does not just fight with enemies, it also makes peace with them and even brings them into the community of nations as equal partners. It has always been these values that have made America great, not its vast military power or its unprecedented economic might.

Without a doubt, a big part of the problem lies with the Taliban themselves, who remain trapped in a myopic approach to governance and minority rights, especially women. The Taliban continue to view women’s rights narrowly, denying girls the opportunity to education and work.

The participation of women in the social, political, and economic spheres is not just an appeal from the international community; it’s a necessity for the effective management of Afghan society. Yet, the Taliban refrain from recognizing the reality. This is exemplified by the Taliban overlooking the well-being of the Afghan people, the rising prices of basic goods and services, deterioration of the job market, severe restrictions of bank accounts, and the flight of human capital from the country which they tend to fix and govern. How else could the Taliban think that simply opening girls' schools in some provinces indicates their intention to ensure women’s rights?

Above all, the central lesson that is yet to be learned is not about waiting on Kabul, Pyongyang, Naypyidaw, and others to change; it is about changing Washington. America needs to think beyond sanctions and beyond what it wants from others. Perhaps most important of all, America needs to learn how to understand its friends and foes as well as what they want from it.

Sami Jabarkhail is a Ph.D. Candidate in Human Resource Development at Texas A&M University and a delegate to the 2014 NATO Future Leaders Summit in Wales, United Kingdom. Follow him on Twitter @SamiJabarkhail.