Afghanistan: Another Failure of the Drug War 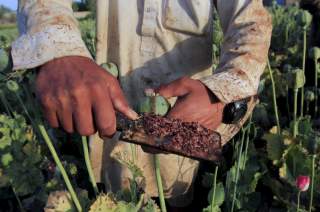 The Washington Post has just published a deep dive into the war in Afghanistan, including the war on opium. These newly released documents expose in stark terms the dramatic failures of our century-long war on drugs. Of all the aspects of the Afghan quagmire, the war on opium has been among the most indefensibly foolish. Metaphorical wars against inanimate objects (drugs, alcohol, etc.) or vague ideas (crime, poverty, etc.) have an extensive history of failure. Continuing to pursue them is nonsensical at best, and deadly at worst.

U.S. opium poppy eradication efforts have cost nearly $9 billion since 2001. In 2001 US airstrikes targeted “a network of clandestine opium production labs that U.S. officials said was helping to generate $200 million a year in drug money for the Taliban,” but aerial efforts were abandoned after “many of the suspected labs turned out to be empty, mud-walled compounds…[and] the U.S. military concluded it was a waste of resources to keep blowing up primitive targets with advanced aircraft and laser-guided munitions.”

American officials struggled with the question of how to address Afghanistan’s status as the world’s leading opium supplier. According to the Washington Post article, military leaders under the Bush administration “saw [fighting opium production] as a distraction or hindrance to their primary mission of fighting terrorists.” Under the Obama administration officials began recognizing the role of opium profits in funding insurgents but were also concerned that acting “could alienate poppy farmers…or U.S.-friendly warlords who profited from opium trafficking,” which would alienate US allies on the ground.

The tipping point in the war on poppies came when US military and intelligence officials began to perceive drug trafficking as a financial boon for terrorists. The drugs themselves were not a cause of terrorism, but prohibition made them a highly profitable and lucrative source of income for the US’ enemies. Therefore, in the eyes of US officials, fighting opium and fighting terrorism were intrinsically linked.

One striking illustration of the folly of strategies developed by the US and its allies was paying farmers large sums to destroy opium crops. The Post reports:

“In the spring of 2002, British officials…agreed to pay Afghan poppy farmers $700 an acre — a fortune in the impoverished, war-ravaged country — to destroy their crops.

Word of the $30 million program ignited a poppy-growing frenzy. Farmers planted as many poppies as they could, offering part of their yield to the British while selling the rest on the open market. Others harvested the opium sap right before destroying their plants and got paid anyway.

In a Lessons Learned interview, Anthony Fitzherbert, a British agricultural expert, called the cash-for-poppies program “an appalling piece of complete raw naivete,” saying that the people in charge had “no knowledge of nuances and [I] don’t know they really cared.”

U.S. officials said the British wanted to be seen as doing something, even though they had little confidence the program would work. Michael Metrinko, a former U.S. diplomat who served in the embassy in Kabul at the time, said the results were predictable.”

Years of failed policy have proven that victory in the war on drugs, as with the war on terror, will not come easily. But one approach will unlink drugs and terror: legalize the production, sale, and use of drugs. Competition in legal markets will drive prices down, thus eliminating drug trafficking as a means to fuel terrorism. The U.S. has no reason to continue a costly, ineffective prohibition when history has shown, time and again, that it does not work.

This article by Jeffrey Miron and Erin Partin