Afghanistan: The Broken Promise of Over the Horizon 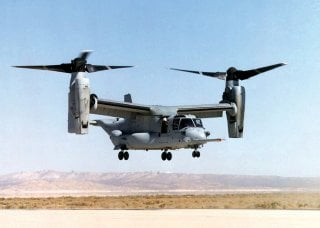 As the humiliating collapse of the Afghan military finds its way into the history books, there will be stacks of “what happened” studies, mostly focused on the failings within the Afghan National Defense and Security Forces (ANDSF). While there is plenty to criticize the Afghan side for, blaming the victim, which is the leading argument of President Joe Biden and his administration, is not only unseemly but incomplete. The United States pledged “Over the Horizon” (OTH) close air, logistics, and maintenance support, and this pledge failed in both promise and performance. It failed to materialize except in very few cases and in those cases where it did appear, such as some close air support, the effect was negligible. As for contractor support, it was non-existent, as it was for the logistical resupply of things such as food and ammunition for front-line troops. While the failure of OTH may not have been a decisive factor in the battlefield rout, it was the single most important pledge made by the United States to the Afghan forces, and was certainly a major reason so many Afghans felt the United States didn’t have their backs.

“Over the Horizon” suggested that a U.S. presence at an adjacent or regional country would provide equivalent (or at least good enough) support to assist the heavily pressured Afghan security forces. Fixed-wing fighters, ISR (intelligence, surveillance, and reconnaissance) platforms, and drone assets are designed to operate from extended ranges and have done so for years in support of Afghanistan. Furthermore, as the Afghan Air Force has grown in size, scale, and quality, a fundamental principle of security assistance affirmed that “as they stand up, we will stand down.” Yet the recent, precipitous battlefield losses among the Afghan military leading to a full Taliban takeover of the country now challenge those OTH assertions.

The Afghans clearly understood the importance of air support.

“Air support becomes critical in providing both assault and airstrikes, logistics and personnel support to our forces across Afghanistan when they are in need of such support. This is mostly true when the forces are overwhelmed by the large numbers of Taliban who come into Afghanistan through our southern borders, just to name a few,” said Colonel Naweed Kawusi, Police Support Director at the Interior Ministry of Afghanistan, just two weeks ago.

So, what went wrong?

There is little question that OTH fell short of its claims. First was the focus on fixed-wing assets as the measure of merit for OTH. Yet, drones and attack aircraft primarily deliver precision weapons, and these weapons are suboptimal for supporting troops in close contact with the enemy. They may be effective against high-value targets, convoys, and critical infrastructure, but they are similarly less effective (and certainly more expensive) when used against dispersed formations of fighters on trucks or foot, in particular when expert U.S. and coalition air controllers are no longer handling the airstrikes.

As General David Petraeus, former commander of U.S. and International Security Assistance Force (ISAF) personnel in Afghanistan, put it in a recent interview,

It’s not just having the aircraft overhead. It’s not just a matter of flying US aircraft from the bases in the Gulf states. It’s not just putting them overhead, it’s having sufficient understanding of what’s happening on the ground to have the confidence to actually drop large bombs and ordinance and not fear that you’re going to have either friendly Afghan security force casualties, or obviously civilian casualties which we always seek to avoid at all cost.

In fairness, Afghanistan is not without its own fleet of fixed and rotary-wing aircraft. Billions of dollars have been spent by coalition nations to procure aircraft, train pilots, and maintain the fleet. It currently has about 162 aircraft, and, importantly, twenty-three A-29 Super Tucano light attack aircraft which provides outstanding close air support. The U.S. government had also vowed to provide the Afghans with thirty-seven UH-60 Black Hawk helicopters to supplement the forty-two Black Hawks they already have.

Nor were the individual skills and bravery of Afghanistan’s pilots in question, but their capacity to carry out operations effectively was debated.

“The issue has never been about the ability, capability, skills and the flight hours of the Afghan pilots,” said Kawusi. “The issue is the system was set up in a way that the knowledge of maintenance, the infrastructure of logistics and the know-how of how to manage the resources was never instilled or established.”

For months, Biden vowed that the United States would make sure the Afghans “have the capacity to maintain their air force,” but about one-third of the Afghan Air Force’s aircraft could no longer fly because they lacked spare parts and, critically, the United States withdrew its contractors from the country. This left the Afghans reliant on their own ill-equipped, understaffed, and poorly maintained air forces. Further, the air force was said to be out of precision-guided missiles which, according to member of parliament Haji Ajmal Rhamani, would have taken “around one year, more or less,” until additional munitions reach Afghanistan.

More important than the shortcomings of OTH fixed-wing support was the departure of coalition attack, assault, and lift helicopters. Highly effective and capable of loitering in a concentrated area of operations for extended periods of time, sufficient rotary-wing helicopters could have provided significant offensive fire, command and control, medical evacuation, and resupply almost indefinitely throughout the area of operations. Without rotary-wing support, promises of sufficient close air support ring hollow.

Less quantifiable, but no less important was the effect on the morale of the individual Afghan soldier. Stationed in outposts throughout the country, far away from urban centers and large coalition bases bristling with combat capabilities, this generation of Afghan troops had routinely counted on air support when the situation became dire. Absent an assurance of armed aircraft coming to fight; assault helicopters to bring reinforcements; medevac helicopters to evacuate wounded comrades; and transport helicopters to deliver food, water, and ammunition, morale among the troops almost certainly plummeted in all but the toughest units. A drop in morale has, throughout military history, had a devastating impact on individual and unit performance, and facing a determined enemy without the assurance of air support is among those reasons so many Afghan military members reportedly laid down their arms.

Reading the daily reports of the Taliban takeover, Afghan government defections, emergency evacuations of translators, and scores of pundits criticizing the hasty U.S. withdrawal were causing angina within the Biden administration. Both the State Department and Defense Department put their best spin on events with John Kirby, the Defense Department spokesman, blaming the Afghans; Ned Price, the State Department spokesman, threatening  the Taliban with a “lack of legitimacy”; and even Biden explaining away the U.S. withdrawal by offering justifications such as “we achieved [our] objectives,” “they’ve got to fight for themselves, fight for their nation,” and, remarkably, “I do not regret my decision."

For most Americans, the fall of Afghanistan may mean little in a nation more focused on domestic issues rather than legacy foreign policy objectives. The United States entered Afghanistan in 2001, inter alia, to “use all necessary and appropriate force against (those who) harbored such organizations or persons in order to prevent any future attacks and future acts of international terrorism,” but it is unlikely that mission has furthered beyond the killing of Osama bin Laden, senior Al Qaeda leaders, and scores of fighters. It is highly likely that Al Qaeda, ISIS, and its affiliates will soon swarm back into Afghanistan, and the Taliban will provide them the sanctuary and safe haven essential to carry out future attacks.

In fairness, claiming that “Over the Horizon” would have been successful commits the logical fallacy of argumentum ad ignorantiam—the absence of evidence is evidence of absence. Even if close air support was provided in volume, maintainers were kept in-country, and logisticians had sent sufficient food and ammunition to the front lines, it is likely that the Taliban offensive would only be slowed, not reversed. Yet, while OTH may not have stopped the inevitable outcome, it would have fulfilled a final American promise to an ally with which American troops had fought and died alongside, “Shohna ba Shohna” (shoulder to shoulder) for twenty years.