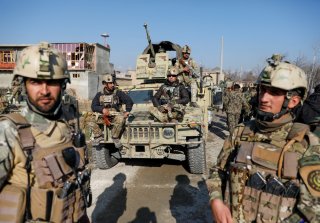 Bagram Air Base, which served as the focal point of U.S. involvement in Afghanistan for nearly twenty years, saw the departure of its last American troops on Friday.

According to AP, two U.S. officials anonymously confirmed that the base had been handed over to the Afghan government. However, they also underlined that the highest-ranked U.S. commander in Afghanistan, U.S. Army General Austin Miller, “retain[ed] all the capabilities and authorities to protect the forces.”

Since then, U.S. forces have precipitously decreased in strength; at the beginning of the year, roughly 3,000 U.S. troops remained in the country.

In April, President Joe Biden made the decision to fully withdraw U.S. troops from Afghanistan; In televised remarks, he stated that all U.S. troops would be withdrawn by September 11, the twentieth anniversary of the 9/11 attacks in New York, Washington, DC, and Pennsylvania. In conjunction with the U.S. withdrawal, an estimated 7,000 NATO troops from a handful of European nations are also being pulled out; Deutsche Welle reported on June 29 that all German troops in Afghanistan, following Germany’s twenty-year mission in the country, had departed.

It has been speculated in recent months that the final withdrawal of all U.S. troops would be set to conclude in July. A string of military victories by the Taliban has prompted calls for delay, but some sources continue to indicate that a full withdrawal in the coming days or weeks is likely. The troop withdrawal, however, will include an exception for an estimated 650 soldiers, who will be left behind to guard the U.S. Embassy compound in Kabul.

Another ongoing point of contention delaying a full withdrawal is the future protection of Hamid Karzai International Airport, Kabul’s main civilian airport, which is currently divided between U.S. and Turkish troops.

The airfield at Bagram has a rich history, intertwined with the modern history of Afghanistan. The airfield was constructed by the Soviet Union in the 1950s; during that country’s ten-year war in Afghanistan, Bagram served as a major logistics hub for the Soviet Army.

Following Moscow’s withdrawal and the ensuing civil war, Bagram fell into ruins again. After the 2001 U.S. invasion, the base was rebuilt, with new airstrips, blast walls, and modern accommodations for resident troops. The base will be left in the hands of the Afghan Security Forces; a formal handover ceremony for the base is scheduled to take place on Saturday.