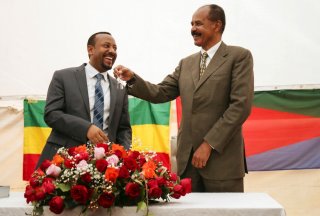 The current unelected president of Eritrea, Isaias Afwerki, has been in power since 1991. The diabolical dictator has outmaneuvered and outlived his political adversaries in the Horn of Africa for three decades. To understand the current crisis in the Horn of Africa, most notably to what is happening in Ethiopia presently, it is imperative to comprehend Eritrea’s role and the geopolitical ambition of Isaias Afwerki: “African Rasputin.”

East Africa is synonymous with instability, famine, non-state actors, and failed states. Still, the most significant contribution the Horn of Africa has made is producing quality dictators such as Haile Selassie, Mengistu Hailemariam, Meles Zenawi, Ismaïl Omar Guelleh, Omar Al Bashir, and Isaias Afwerki. If there is a game of thrones for the “dictator of dictators,” Isaias Afwerki would win without contest. The African Rasputin has survived assassinations at home, war with Yemen in 1995, war with Ethiopia from 1998-2000, democratic movements in Sudan and Ethiopia, regime change from both regional and international actors, UN sanctions, and the Arab Spring—all while making Eritrea the Alcatraz of Africa for five million people.

Who is Isaias Afwerki?

Isaias Afwerki was the architect of the highly secretive and centralized rebel group called the Eritrean People Liberation Front (EPLF). This rebel group was able to defeat a Western and Soviet-backed army, which, with the Tigray People Liberation Front (TPLF) assistance, eventually led to Eritrea’s independence. Afewerki is an unapologetic Marxist that received his military training and Maoist indoctrination in China during the Cultural Revolution. The EPLF was notorious for being a Marxist liberation front. During the struggle for independence, the EPLF translated the various works of Marx, Mao, Engels, and Lenin into Tigrigna, Eritrea’s working language, as tools for indoctrination and mobilization. Additionally, Afewerki was a brilliant commander and militarily and tactically proficient in the arts of subversion. He is currently one of the last remaining dictators in the Horn of Africa and its most brutal.

Ironically, U.S. President Bill Clinton called Afwerki a “renaissance African leader.” Still, Afwerki, true to his colors, never changed his political ideology or brutality against political dissenters and activists, religious figures, and the Eritrean people. Afwerki is a manipulative, charismatic, highly intelligent, and vindictive dictator. Eritreans’ aspirations for a democratic country with a market economy ceased to exist on September 18, 2001, when Afwerki took advantage of the horrific terrorist act of 9/11. In six days, he found a window of opportunity to imprison the most influential ministers of the G-15 reform movement and install a one-party dictatorship with himself as the supreme leader. The members of G-15, the ministers who dissented from Afwerki’s erratic authoritarian behavior concerning the senseless war with Ethiopia from 1998-2000, are still imprisoned and held indefinitely without trial.

The instability in the Horn of Africa, especially in Somalia and Ethiopia, can be traced to the malign influence of the Eritrean regime and Afwerki’s vendetta against Meles Zenawi, the last benevolent dictator of Ethiopia and founder of TPLF as both a political and military entity. Afwerki and Zenawi were loyal allies and comrades in arms during their struggle to overthrow Mengistu Hailemariam, a bloodthirsty communist dictator of Ethiopia. After Eritrea’s independence, the two leaders became ideological rivals for both geopolitical and geoeconomic influence in the region. The hostility between both countries and both leaders led to the 1998-2000 war that took the lives of approximately 70,000 to 120,000 people. The war ended with the Algiers Agreement, awarding Badme to Eritrea.

Afwerki, too, is a resilient, opportunistic, stubborn, and battle-hardened commander and has been playing games in the Horn of Africa against Zenawi for decades. Afwerki’s goal has been to destabilize Ethiopia internally by arming and supporting various rebel groups, hoping to advance his goal of regime change in Addis Ababa. For example, Afwerki supported Ginbot 7, an armed rebel group headquartered in Asmara led by Berhanu Nega, an economics professor at Bucknell University turned rebel commander. The regime in Asmara decentralized its effort in orchestrating regime change in Ethiopia by diversifying its support for rebel groups through the arming of the OLF, Oromia Liberation Front, and ONLF, Ogaden National Liberation Front.

Afwerki’s hate for Zenawi and the TPLF led him to arm and fund one of the deadliest terrorist organizations in Africa, Al-Shabaab. Ethiopia invaded Somalia in 2006 to oust the ICU, the Islamic Courts Union, in coalition with the TFG, Somalia’s Transitional National Government, and Afwerki supported Al-Shabaab to create more instability in Mogadishu. It is quite unorthodox for a communist dictator to fund and arm a Sunni terrorist organization that despises secular values, norms, and Marxist ideology. Still, for Afwerki, Al-Shabaab was an instrument with which to fight the Ethiopian troops in Somalia. The international community imposed sanctions on Eritrea, UN Resolution 1907, for supporting Al-Shabaab in 2009, and the sanctions were lifted on November 18, 2018, with the adoption of UN Resolution 2444.

Abiy Ahmed, the unelected prime minister of Ethiopia and Nobel Peace Prize winner, forged an alliance of convenience with one of the most ruthless dictators in the world to prevent the TPLF from gaining any political representation in Ethiopia. Afwerki accepted the olive branch from Addis Ababa in 2018 not just to restore peace between Ethiopia and Eritrea and end the cold war, but to finally finish what he started decades ago: to eliminate the TPLF.

Afwerki exploited the window of opportunity to restore ties with Abiy because he knew that Abiy and the TPLF regime, which had been in power for more than two decades, were going to clash. Afwerki’s calculation was extraordinarily accurate. The current crisis that is engulfing Ethiopia has Afwerki’s footprints from Mekelle, the Tigray region’s capital city, to Addis Ababa, the capital city of Ethiopia. Abiy Ahmed found in Asmara an ally who can help solidify his regime in Ethiopia. The current partnership is based not on the normalization of ties between the two nations but on the mutually beneficial agreement that the TPLF regime should cease to exist at both parties’ behest.

Afwerki’s strategic bandwagoning behind Abiy led to three outcomes. First, the United Nations lifted the arms-embargo sanctions on Eritrea. Second, it crystallized his iron rule in Eritrea. Third, it created a coalition against his arch-enemy, TPLF. It is not the first time, nor will it be the last time that Afewerki shifts alliances for strategic purposes. The regime’s abandonment of Qatar after the Saudi-led embargo coalition against the small nation is another example, with Afwerki finding new patrons in Riyadh.

Business as usual in Asmara

The Eritreans are asking themselves what they gained from the peace process with Ethiopia. The answer is simple, but regrettable: absolutely nothing. For Afwerki, it is business as usual to oppress Eritreans. The Eritrean regime has kept its people in darkness and prevented them from exercising their God-given right to freedom. Eritrea is, rightly so, identified as the North Korea of Africa. The communist regime of Isaias Afwerki, like any other communist regime, has only brought collective misery to Eritreans, who wait in anguish for reform, the death of the communist dictator, or the regime’s collapse.

The indefinite conscription of soldiers for national service has turned the military into an institution of modern slavery with no end in sight. Such circumstances have led many Eritreans to flee the country. Maximum oppression is the modus operandi of the Eritrean regime. The regime has only one national media outlet, state-owned Eri-TV, which broadcasts communist propaganda to brainwash the Eritrean populace into eternal misery without human progress. The Eritrean people can only access three channels on Eri-TV, and every channel propagates the regime’s propaganda. So far, at least 10 percent of the five million Eritreans globally are refugees, but it is thought to be an even higher percentage. Eritrea, a country without a civil war, is a significant contributor to the refugee crisis the world is experiencing. Eritreans are not economic migrants; they are refugees thirsty for freedom. If Mao Zedong is equivalent to Isaias Afwerki, then the Eritreans are anxiously waiting for the Eritrean equivalent of Deng Xiaoping.

The TPLF find themselves sandwiched between the regime in Eritrea and Abiy Ahmed’s government in Addis Ababa. So far, Afwerki holds all the cards concerning both Ethiopia’s trajectory as a sovereign country and the outcome of Ethiopia’s ethnic civil war. Contrary to what most people believe, Afwerki has pitted the Ethiopian government against the TPLF, and Abiy Ahmed needs the blessings from Asmara to attack the TPLF on Eritrean territory. On November 14, 2020, the TPLF attacked Eritrea by launching missiles into the Eritrean capital, Asmara. The TPLF leadership has declared that sixteen Eritrean divisions are currently waging war against the TPLF from the North. By attacking Eritrea, the TPLF expanded the ethnic civil war in Ethiopia to a regional conflict. It is a question of time when Eritrea’s regime will take punitive, retaliatory measures against the TPLF for violating Eritrea’s territorial sovereignty. Therefore, what is the inevitable conclusion? For certainty, Afwerki and Abiy Ahmed will wage war against the TPLF from the north and south. Eventually, time will tell if Ethiopia becomes another Rwanda, or the TPLF finally submits to Afwerki and Abiy Ahmed.