After 190 Years, America’s Involvement in Southeast Asia Is Sailing Strong 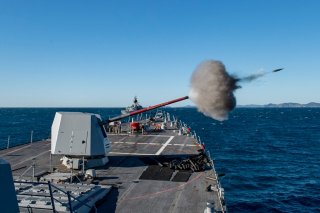 The Biden administration’s ongoing blitz of diplomatic visits—including Vice President Kamala Harris’s visits to Vietnam and Singapore at the end of August; Secretary of State Antony Blinken’s virtual meetings in early August with Association of Southeast Asian Nations (ASEAN) officials; and Secretary of Defense Lloyd Austin’s trips to Vietnam, the Philippines, and Singapore (where he gave the IISS Fullerton Lecture) in July—indicates that the United States is coming back strongly in the Southeast Asia region, purportedly to balance China and to uphold the rules-based order in the South China Sea.  Nevertheless, a lesser-known event that had occurred 190 years ago provided the catalyst for the United States’ first strategic involvement in the Southeast Asia region.

In February 1831, a U.S. merchant ship, Friendship, arrived at Kuala Batu off the coast of Sumatra island to conduct its lucrative pepper trade. The Strait of Malacca runs between the eastern side of Sumatra and the western coastline of Peninsular Malaysia. While smaller boats were used to transport pepper onto Friendship moored off the coast, it was attacked by pirates which killed its crew and plundered its cargo of opium and gold. The Friendship’s captain, Charles M. Endicott, and a few of his men who were ashore when the attack took place survived and escaped. With the help of other U.S. merchantmen in the area, he managed to recover his ship and sailed back to Salem, Massachusetts, to report the incident. U.S. president Andrew Jackson was enraged and decided to send a retributive naval operation to inflict “chastisement”—to punish the pirates and deter further piracy. This was the first U.S. naval operation to keep maritime sea lanes safe in Southeast Asia.

A U.S. Navy frigate, USS Potomac, commanded by Commodore John Downes was sent to Sumatra on August 19, 1831. The mission was known as the First Sumatran Expedition. The USS Potomac was armed with a combination of thirty-two carronades and thirty-five long guns, and had close to 500 sailors and marines on board.

The frigate arrived off Kuala Batu on February 5, 1832, and found that there were five forts guarding the coastline. Commodore Downes met with a local chieftain and was informed that the pirates will not be receptive to negotiations.  Downes decided to attack the coastal forts at Kuala Batu on February 7, 1832. The USS Potomac, disguised as a Danish merchantman, managed to sail close to Kuala Batu and landed a force of 282 marines and bluejackets. The U.S. naval party promptly started burning the pirates’ boats and assaulted the forts but met fierce local resistance that led to brutal hand-to-hand fighting. The Potomac provided covering fire with its cannons causing substantial damage to four of the coastal forts. The marines and bluejackets succeeded in defeating the pirates on the ground; The rest of the locals retreated into the surrounding jungle. An estimated 150 pirates and two Americans were killed in the amphibious raid.

After crushing the pirates, the U.S. Marines and bluejackets were withdrawn. The Potomac continued to bombard Kuala Batu’s last remaining fort further inland and killed another 300 locals before the survivors sued for peace with Downes. Other local chieftains, fearing for their own fates, also asked for mercy from Downes who made them to agree not to attack any U.S. vessels in the area or else face similar punishment. The Potomac, having accomplished its mission, sailed away and completed its circumnavigation of the globe.

Thus ended the First Sumatran Expedition. Nonetheless, six years later, another U.S. merchant ship, the Eclipse, was attacked at Sumatra near Trobongan village and its crew was massacred.  The United States sent a Second Sumatran Expedition which reached Sumatra in 1839. The U.S. naval flotilla of two frigates destroyed Kuala Batu and Muckie. Afterward, there were no more major pirate attacks on U.S. merchantmen in the Strait of Malacca area for a long time.

These U.S. strategic missions in the 1830s initiated by the pirate attack on Friendship were the first military interventions to protect maritime security in Southeast Asia.

Today, the United States is again flexing its political and military muscles to ensure international waters in the region are safe, secure, and free for all to use, subscribing to the global rules-based order. It is not surprising that today, when confronted with potential risks of a peer competitor challenging the status quo of free and open maritime passage as provided under the United Nations Convention on the Law of the Sea (UNCLOS), the United States is continuing its strategic policy to actively safeguard its interests in Southeast Asia as it did 190 years ago. Fortunately, today America is not alone. The United States now has many allies and security partners in the region that share common security interests.

Adam Leong Kok Wey is associate professor in strategic studies and the Deputy Director of Research in the Centre for Defence and International Security Studies (CDISS) at the National Defence University of Malaysia. His latest book is  Strategy and Special Operations: Eastern and Western Perspectives published by NDUM Press (2021).