After Bolton: 5 Things the Next National Security Adviser Must Do on Day 1 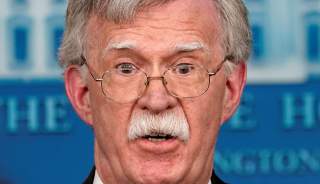 The race to be President Donald Trump’s next national security adviser is on, and it’s anybody’s guess who will emerge from the pack of 15 or so individuals now on the list.

Curt Mills, a senior writer for the American Conservative who broke the story of John Bolton’s resignation, writes that U.S. Ambassador to Germany Richard Grenell (a favorite of Don Jr) is a serious contender.  Former U.S. Army Colonel and Fox News favorite Douglas Macgregor is also in contention, perhaps the closest to Trump in terms of extricating the United States from the endless wars that have sucked up so much blood and treasure over the last 18 years.

Just as important as Bolton’s replacement, however, is what the replacement does to steady a ship that could use some patchwork before the water comes rushing in.  The next national security adviser needs to get to work the moment he or she steps into the White House.

1. Get rid of Bolton’s people:

John Bolton is an uncanny bureaucratic operator. Indeed, he may be one of the best at playing the inter-agency game. The national security veteran isn’t afraid to plant loyalists throughout the bureaucracy and to cut up those who don’t get with his program.  As long as Bolton’s aides are in positions of power, the next national security adviser will have to deal with the leftovers of a Bolton regime that will drag out the process or delay the paperwork.  While a few have moved on already, all of them need to go.  A house cleaning is in order.

The new boss needs to call a staff meeting on the first day and send a clear, stern directive to everybody in the conference room: any staffer caught undermining the president’s foreign policy agenda, either by leaking to the media or bad-mouthing the policy to members of Congress, will be immediately terminated. No if’s, and’s, or but’s.

There is no question the Trump administration’s maximum pressure strategy is giving Tehran’s finances a beating. Iran’s crude oil sales are down by at least 80%, a consequence of foreign consumers cutting off their dealings in order to preserve their access to the American market. But strategically, the pressure has failed abysmally to change Iran’s foreign policy in a more constructive direction. The Iranian government today is no more willing to come back to the table for new negotiations than it was when the pressure campaign began.  In fact, Iran’s behavior has only become more aggressive. The next national security adviser needs to organize an in-depth study of policy options with a sole objective in mind: deescalation and tension reduction.

With Bolton out, it will presumably be easier for Trump to pursue a diplomatic process with North Korean leader Kim Jong-un that actually works. Bolton was a major obstacle to a reasonable negotiating strategy, largely because he opposed talking with the Kim regime in the first place and viewed any deal short of North Korea’s immediate, full, and verifiable denuclearization as an unacceptable surrender to evil forces. The result was a collapse of the Hanoi summit in February, when Trump and Kim flew back to their respective capitals with nothing to show for the effort. A new strategy, shepherded and protected by the next national security adviser, would prize patience, prudence, and incrementalism over wily and unrealistic proposals.

5. Bring restraint into the White House:

Washington, D.C. has been dominated by primacists, neoconservatives, and liberal internationalists for far too long. Military overextension, policies driven by ego and hubris, and throwing good money after bad is not what the American people want.  Public opinion on foreign policy is more in line with the likes of Rand Paul than Liz Cheney. Trump understands this clearly—after all, was part of his campaign—even if he sounds like a militarist on Twitter.

Trump takes counsel from a number of advisers. But right now his team is skewed in a hawkish direction. Assuming the president wants more balance in his shop, he would take the advice of my friend John Allen Gay and choose somebody who can reinforce his aversion to unnecessary foreign entanglements. There needs to be somebody in the White House who can talk the president off the ledge after returns from playing a round of golf with Sen. Lindsey Graham.