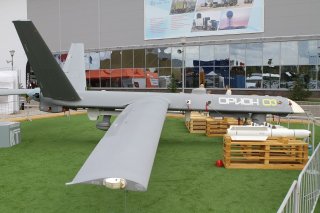 Two decades after a CIA-operated MQ-1 Predator drone performed the first modern drone strike, Russia is joining the killer drone club as it begins series production in 2021 of its domestic Kronshtadt Orion combat drone—both for service in the Russian military as well as export to clients abroad.

Amongst around a half-dozen Unmanned Combat Air Vehicles (UCAVs) currently at various stages of development in Russia, Orion—also known as the Inokhodet (“Pacer”)—is the first to enter regular operational service with the Russian military.

A factory under construction in Dubna (near Moscow) will annually produce “dozens” of the medium-altitude, long-endurance (MALE) surveillance and strike drones once it commences operations in November. Each Orion UAS includes three to six of the drones, which weigh one ton each, as well as operator stations, radio equipment, and a take-off-and-landing module.

Samuel Bendett, an adviser to the Russian Studies program at the Center for Naval Analyses and adjunct senior fellow at the Center for New American Security (CNAS) think tank, wrote to me it’s estimated “several hundred” Orions would be built.

Russia has lagged significantly behind China, Israel, and the United States in developing unmanned aerial systems (UASs). But after a mediocre showing in the 2008 Russo-Georgia war, Moscow began a major effort to modernize the Russian military. That included license-building Forpost surveillance drones based on the Israeli Searcher II —a type the Orion may replace, according to Bendett, due to its similar characteristics.

Kronshtadt began developing Orion in  2011 under designer Nikolai Dolzhenkov, but the project was soon beset by delays. Bendett wrote to me that this was “…due to the [Russian] defense industry’s attempts to import-substitute key microelectronics and engine technologies, to rely less on such imports that are still important to many domestic drone projects. Kronshtadt claims today that all its key UAV components are domestically produced, which took time to scale up.”

For example, the first three Orion prototypes used an Austrian Rotex 914 piston engine—the same type used on Predator drones. The firm then had to wait for development of the indigenous APD-110/120 engine instead.

The Orion was combat tested in 2018 dropping guided bombs on Syrian insurgents, with one Orion reportedly flying 38 sorties and executing 17 strikes. Then in August 2020 an Orion performed its first known test-fire of a missile.

The one-ton drone can fly up to 24,600 feet high and boasts an endurance of 24 hours, technically putting it in the same class of MALE drone as the U.S. Reaper and Predator combat drones—meaning it can orbit for hours over a battlespace, beyond the reach of short-range air defenses, while their human operator scans the ground below and lobs precision-guided missiles at their discretion. The Orion cruises at 75 miles per hour, but can sprint at 124 mph if necessary.

But while a Reaper has a range of 1,200 miles and can be operated from across the globe thanks to its satellite communications link, the Orion’s fuel and radio link restrict it to a range of 160 miles while carrying a 132-pound payload. Extending the command link using a drone relay only boosts its range to around 186 miles.

The Orion is closer in cost and capability to the Turkish Bayraktar TB2 drone, which has half the Orion’s maximum range at 81 miles. Despite that, Bayraktars significantly impacted wars in Libya, Syria, and the Nagorno-Karabakh region in 2020.

The Orion has two payload bays for mission systems. The forward one usually is occupied by a 122-pound electro-optical/infrared sensor turret with a laser rangefinder. Secondary payloads under development include a compact Phazotron MF-2 X-band multi-function radar, a signals-intelligence system, and jammers for use in electronic warfare.

For all their uses, MALE drones remain vulnerable to armed forces that can deploy medium- or long-range air defenses. And they aren’t so cheap as to be truly expendable, though the combat record of the Bayraktars in Libya and Syria suggest drone operators may “trade-off” UCAVs against longer-range air defense systems to win a war of attrition.

The Orion has two external and two internal hardpoints to mount its maximum weapons load of 440 pounds. As smaller UCAVs cannot carry the heavy bombs used by manned combat aircraft, drone manufacturers in China, Turkey, the United States have developed many lightweight precision munitions for use by drones. Russia has followed suit, as pictured here.

The 21-kilogram KAB-20 and 50-kilogram KAB-50 bombs can be fitted for infrared, TV- and laser guidance. The UPAB-50S is a glide bomb with fold-out wings and a range of 30 miles, potentially enabling strikes on medium-range air defense systems. It uses a warhead taken from a 122-millimeter Grad artillery rocket, though it can also be fitted with cluster munitions and fuel-air explosives. There’s also the X-50 or Kh-50, a 50-kilo missile similar to the U.S. AGM-114 Hellfire which can apparently mount a laser-guidance seeker.

But to what extent is an Orion’s AI capable of initiating attacks? “According to Kronshtadt’s own statements, it’s likely that AI will help guide Orion to target, once such target has been identified and approved by a human operator,” Bendett wrote me. “A fully autonomous operation is also likely down the line, [again, only] once the human operator has identified the target. Other UCAVs currently in different stages of testing and evaluation will have a similar role for AI and autonomy, but much will be determined once actual flight and mission tests are carried out.”

In 2022 production of Orion-E export-model drones will commence. Long-billed as a strictly surveillance-only model, in June 2021 Russian media reported strike-capable Orion-Es were on offer too.

Though the Orion-E reportedly has already received several orders, Bendett cautioned that the drone’s commercial success is not guaranteed. “Orion will enter a crowded and well-established MALE/ISR/UCAV market that is already dominated by U.S., Israeli, Chinese, Turkish, and even Iranian drones. Moscow also announced that procuring Orions for the Ministry of Defense takes priority over exports.

“It’s likely that Orion UCAVs will be offered to potential partners in the former Soviet Union and to nations like Syria, where Russia has strong military-to-military relationships. It’s also important to remember that such exports are not just about technology but politics as well, and nations importing Russian military tech are also gaining a key political relationship.”

While potential buyers have not been identified, it’s reported Moscow has offered the Orion to Armenia, a military ally that suffered heavy losses to Turkish Bayraktar drones in 2020. Other countries lacking armed drones while maintaining close ties to the Russian military include Belarus, Myanmar’s military dictatorship, and Vietnam.

Looking ahead, Kronshtadt is promoting two enlarged evolutions of the Orion. One concept, the 5.5-ton Orion-2 or Helios, is a high-altitude long-endurance (HALE) drone that could fly up to 39,000 feet high and traverse up to 3,100 miles.

There’s also the five-ton Sirius UCAV, with greater range and speed than the Orion, a satellite communications link, and increased payload to encompass 100-kilogram class weapons, including light anti-ship missiles.

The company also has a concept for a stealthy, armed ‘loyal wingman’ drone called Grom that could assist manned jet fighters while flying at high subsonic speeds.

“Okhotnik and Altius are already flight-tested, and will start entering service around 2024 or thereabouts,” he wrote. “Helios, Sirius and Grom are still Kronshtadt concepts and are years away from actual testing an evaluation…[they] are not yet part of official MOD funding and acquisition, the way Okhotnik and Altius already are.”