After a Long Pacific Tour, the USS Carl Vinson Recharges in Guam 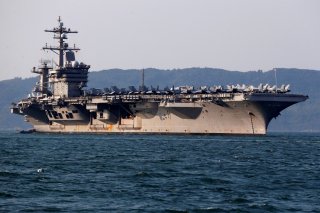 It had been the carrier strike group's first port call since visiting Yokosuka, Japan in early September. It also marked the first time a carrier with the advanced capabilities of the Lockheed Martin F-35C Lightning II stealth fighter jet and U.S. Navy CMB-22B Osprey tiltrotor aircraft have visited Guam.

Moreover, due to Covid-19 concerns during the visit to Yokosuka, this was the first time during the deployment that the crew of the carrier was authorized for off-base liberty.

"The men and women aboard our ship have worked diligently since we left home and their efforts have paid great dividends toward enhancing maritime security and regional stability in some of the most heavily navigated shipping lanes of the world," said Capt. P. Scott Miller, commanding officer of USS Carl Vinson. "We are grateful for a chance to enjoy the hospitality and beauty of Guam which has been a home away from home for many sailors throughout the years."

After what was hopefully a restful and productive weekend, the warships departed from the port visit on Tuesday, November 16.

The Carl Vinson Carrier Strike Group is on a scheduled deployment in the U.S. 7th Fleet area of operations to enhance interoperability through alliances and partnerships while serving as a ready-response force in support of a free and open Indo-Pacific region.

In August 2020, Vinson completed a seventeen-month maintenance availability to receive major upgrades in order to support fifth-generation aircraft, making her the first U.S. Navy aircraft carrier equipped to support both the F-35C Lightning II and CMV-22B Osprey. Upgrades included enhanced jet blast deflectors able to take the increased heat generated by the F-35C as well as the addition of the Autonomic Logistics Information System, which is the new computer network that supports the unique maintenance and tactical operations functions of the advanced aircraft.