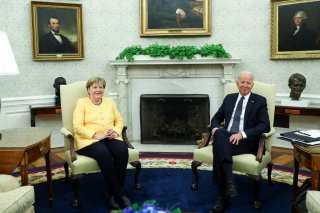 Even before the departure of German chancellor Angela Merkel from office, an intense focus on her legacy is well underway.  After her sixteen years of sober leadership, such a premature discourse is natural.  Yet normal or not, the real focus should be less about her past legacy and more about the future, especially in terms of the pivotal position of Germany for European-Russian relations.  And at the same time, there are several factors comprising concern over both German and European policy toward Russia in the post-Merkel period.

First, for whoever ascends to lead Germany next, the imperative will be to recommit to the transatlantic relationship, by seizing the opportunity inherent in U.S. president Joe Biden’s move to restore and repair relations after the damage done during the Trump Administration.  And this means that for Biden’s course correction, Berlin is more important to Washington than ever before, as demonstrated during Merkel’s recent farewell visit to Washington.  In that context, a new U.S.-German geopolitical parity is both probable and possible, despite the divergence of interests over the German-Russian Nord Stream 2 gas pipeline.

The second concern, however, is that any such new parity in U.S.-German relations will be based on Washington conceding greater respect and ceding more freedom for Berlin in exercising and exerting its own power and influence as a European leader.  And from that broader strategic perspective, the United States may value German and European support for issues other than Russia.  More specifically, the Biden Administration is more likely to pursue a transactional approach with Berlin, centered on containing the challenge of China, re-engaging Iran on a revised nuclear agreement, and mitigating the fallout from a withdrawal from Afghanistan.

And it is here, in terms of Germany’s position as the pivot in European-Russian relations raises a third concern.  For the next German chancellor, the challenge will come not from Washington but from Paris, in a looming contest for pan-European statesmanship, as French President Emmanuel Macron is eager to take the reins of leadership.  This will only weaken European resolve, however, and offer Russian president Vladimir Putin yet another opportunity to divide European political will.  And no matter who wins the coming battle between Berlin and Paris for European statesmanship, the subsequent status and stature will only be undermined by the display of a divergence of interests within the EU over Russia.  Thus, as yet another in a series of Russian probes of Western will and resolve, the outlook seems bleak for any coordinated, coherent or courageous EU stance to push back against a repeatedly re-assertive Russia.

Richard Giragosian is the Director of the Regional Studies Center (RSC), an independent think tank in Yerevan, Armenia.