After Ukraine, the United States Must Reset Relations with Turkey 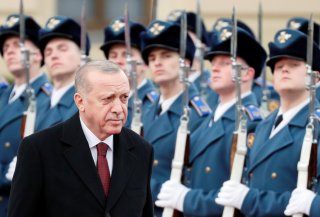 Turkey has been playing one of the most complex and constructive roles of any NATO member throughout the Ukraine crisis. Indeed, Ankara’s response to the conflict has been measured and nuanced: Turkey has supplied the Ukrainian military with drones that have wreaked havoc on the Russian invaders and effectively closed the Black Sea straits to Russian warships while also opposing sanctions on Russia and offering to host peace negotiations in Ankara between representatives from Moscow and Kyiv.

In doing so, the Erdogan government has demonstrated that it is not the instinctively anti-Western regime caricatured by some Western observers. It is rather responding to a series of constraining and contradictory threats and incentives arising from the catastrophic aftermath of the Arab Spring, the resurgence of Russian revanchism, and, most of all, the internal struggles in Turkey over civil-military relations as well as unresolved tensions and divisions over state-backed secularism and popular religious sentiment.

As the United States attempts to repair relations with Ankara, the Western alliance is presented with an historic opportunity to reintegrate a key member with an indispensable role to play in the future of NATO and the peace of Europe.

Since the early 2010s, relations between Turkey and other NATO member states have deteriorated to the point where discussions of Turkey’s potential withdrawal or expulsion from NATO have become mainstream. Moscow has sought to exploit these tensions through unprecedented outreach to what has historically been a Russian adversary, including by selling Russian-made equipment to Turkey that is designed to counter NATO military capabilities.

Relations between Turkey and its Western allies have been exacerbated by Western responses to the “democratic backsliding” that has occurred under the rule of President Recep Tayyip Erdogan and his Islamist allies. Western support for Kurdish nationalist and separatist militants in Syria and Iraq, disputes over EU-Turkey agreements on addressing refugee crises, and the alarm and mistrust that followed a failed coup attempt in 2016 that nearly toppled Erdogan have further enflamed tensions.

The standard narrative explaining Turkey’s alienation from NATO places most or all the blame on Erdogan’s Islamist-inflected, nationalist-populist authoritarianism. These explanations range from depicting Turkey under Erdogan as ideologically anti-Western to ascribing the rapprochement between Turkey and Russia as based on a shared illiberalism. As well-intentioned as Western concerns over the state of democracy and human rights in Turkey may be, they do not account for the full complexity of the strategic dilemmas that Ankara has been confronting since the early 2010s. Further, they discount the historical conditions under which Turkey’s representative institutions have evolved.

Turkey faces a complex and dynamic threat matrix that is unlike what any other NATO state must contend with. Historically, Russia in the north and Iran to the south have waged costly armed conflicts against Turkey, which ended either inconclusively or in a Turkish defeat. The emergence of Russian revanchism manifests a new version of an old threat to Turkish security, with Russia and Turkey backing opposing factions or countries in the Caucasus, Syria, and Libya. Besides these historical adversaries, Turkey also faces threats to its territorial integrity from Kurdish separatists both within and near its borders, including a U.S.-designated terrorist group, who have seized upon the conflicts created by the Arab Spring to expand their influence.

Internally, civilian rule since the establishment of the republic has been both insecure and intermittent while Ataturk’s imposed secularism had an authoritarian character all of its own. The Erdogan government bases part of its populist appeal on traditional religious values in stark contrast to the heavy-handed secularism that has traditionally been both encouraged and enforced by state institutions, the media, and the universities. Its tenure is also one of the longest periods of uninterrupted civilian rule since Ataturk’s death—despite facing a violent putsch in 2016.

These risks and threats escalated in the 2010s during a time when the United States pursued a foreign policy that, as Henry Kissinger put it, “basically withdrew America from international politics” and, in turn, forced other countries to “make their own assessment about their necessities.” A key turning point here was U.S. equivocation on intervention in Syria, where President Barack Obama dismissed a new jihadist threat in the form of ISIS as a “jayvee team” and gave ambiguous assurances to anti-regime rebels while the Assad regime’s atrocities, including the use of poison gas against civilian populations, occurred with total impunity.

Through its own intervention on the side of Syrian rebel forces, Turkey had placed itself in a particularly perilous position against a regime that was being backed by both Russia and Iran. Then, after the United States reneged on its “red line” commitment against the Assad regime, Turkey found itself isolated and exposed to possible Russian and Iranian retaliation.

In this context, Turkish receptiveness to Russian outreach bears closer similarity to classic bandwagoning behavior than the sinister autocratic pact Western observers imagine. Turkey faces far more imminent and considerable risks in its relationship with Russia than any other NATO member state. Whereas other frontline NATO states such as Poland or the Baltic states do not face any other major threat besides Russia and remain confident in NATO’s security umbrella, Russia complicates Turkey’s threat matrix—which includes a myriad of other pressing threats—and it does so in an era in which the United States has demonstrated a historic inconsistency in its foreign commitments.

Consequently, the first step towards repairing relations between Turkey and NATO would be to restrain the use of sanctions in response to Turkey’s arms purchases from Russia. Punitive action against Turkey in response to its positive reception of Russian overtures will only accelerate the bandwagoning behavior that Turkey has undertaken since the Arab Spring. Since Russia poses a more direct challenge to Turkey than it does to most NATO member states, U.S. and European policymakers will need to recognize that Turkey must weigh the risk of snubbing or opposing Russia at a time when U.S. and European credibility has become ambiguous.

Further, the United States must push the Europeans to take the initiative to repair their own relations with Turkey by incentivizing the Erdogan government to stay within the Western fold. This will need to include serious and credible negotiations on customs unions between the EU and Turkey as well as plans for more flexible travel arrangements for Turkish citizens to EU countries. This need not mean the outright admission of Turkey as an EU member, but it should involve some tangible and measurable moves towards Turkish integration with Europe.

The United States should also play a more neutral role in mediating tensions and disputes between Turkey and other NATO states such as Greece and France, which have pursued interests and objectives in direct opposition to Turkey. In the Caucasus, the United States should adopt a nominally neutral stance regarding Turkish-Russian proxy conflicts in any related crisis between Armenia and Azerbaijan while pledging to support Turkey in defending its own territory.

As regards the Russian invasion of Ukraine, the United States should continue to recognize and support Ankara’s efforts to mediate between Moscow and Kyiv while refraining from pressuring the Erdogan government from moving away from the neutral stance it has maintained in the war.

Overall, the United States and NATO should recognize that Turkey faces a unique geopolitical environment that is more dangerously complex than any other NATO member state. Turkey will continue to have its own separate national interests and legitimate security concerns regardless of who is in power in Ankara. The United States and NATO would do well to recognize that.

Wesley Jefferies is a graduate student at the Walsh School of Foreign Service’s Security Studies Program at Georgetown University in Washington, DC.