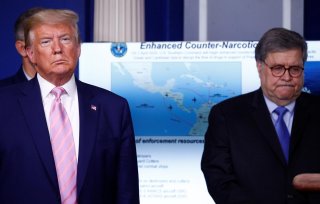 Attorney General William Barr on Monday publicly released an official memorandum he sent to United States attorneys and to his assistant attorney general for civil rights. The subject of the memo was “Balancing Public Safety with the Preservation of Civil Rights.”

The memo is a succinct acknowledgment of the extraordinary challenges posed by the coronavirus, a much-needed reminder of our constitutional rights, and a warning to those states and localities that might tread upon our individual rights.

Barr’s memo is, in effect, a warning order to his 94 U.S. attorneys. It tells them to “be on the lookout for state and local directives that could be violating the constitutional rights and civil liberties of individual citizens.”

In that memo, he directed Eric Dreiband, the assistant attorney general for civil rights, and Matthew Schneider, the U.S. attorney for the Eastern District of Michigan, “to oversee and coordinate our efforts to monitor state and local policies and, if necessary, take action to correct them.”

In releasing the memo to the public, Barr reminded all of us that the coronavirus “has required the imposition of extraordinary restrictions on all of our daily lives.”  That’s certainly true, as millions of Americans “have been ordered to stay in their homes, leaving only for essential and necessary reasons, while countless businesses and other gathering places have been ordered to close their doors indefinitely.”

Those restraints on liberty—which we have written about here and here—have “been necessary in order to stop the spread of a deadly disease.”  But Barr acknowledges that those restraints have also “imposed tremendous burdens on the daily lives of all Americans.”

Barr’s memo is directed, in large part, at restrictions that impact our rights under the First Amendment. He reminded states and localities that they have to be mindful when crafting temporary rules to fight COVID-19 and that “the First Amendment and federal statutory law prohibit discrimination against religious institutions and religious believers.”

We have already seen lawsuits by church leaders who claim that local laws discriminate against them during the pandemic. Some of those lawsuits have been successful.

The attorney general, who is charged with enforcing federal civil rights laws, is reminding everyone, and local and state officials in particular, that “the Constitution also forbids, in certain circumstances, discrimination against disfavored speech and undue interference with the national economy.”

Barr reiterated that while the Justice Department will not “unduly interfere with the important efforts of state and local officials to protect the public,” the Constitution is “not suspended in times of crisis.”

As veterans of the Justice Department, we are confident that it will remain vigilant in upholding civil rights, and we are hopeful that this memo will remind local and state government officials of their duty to balance public safety with respecting our constitutional rights.

This article by John G. Malcolm and Cully Stimson first appeared in The Daily Signal on April 27, 2020.