Age of the 'Elbow Shake'? How Coronavirus May Have Changed Our Greetings Forever 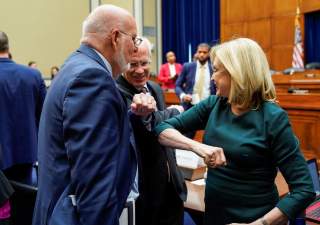 “Please refrain from hand shaking,” read a sign at an event in London I recently attended. Despite increasing anxiety about coronavirus, for many of us, it was the first time we had encountered such a request. Underneath the words was a small image of two disembodied hands shaking, surrounded by a red circle struck through with a diagonal line.

Refraining from such a common behaviour was easier said than done. Handshaking comes automatically to many of us. The art of a proper handshake was drummed into me at a young age when growing up in the United States. When I was around ten years old, my father would rehearse my handshake with me: “Make eye contact first. You don’t want to shake hands like a dead fish.” So I gripped his hand as firmly as I could, my little wrist and fingers straining with pressure, my eyes locked on his.

Since then, I’ve become fascinated with the choreography of the handshake: steady eye contact, slight head nod in acknowledgement, slight step forward, extension of the right hand in one fluid movement before grasping your partner’s hand with just the right amount of pressure.

The handshake has long been understood as a gesture that establishes a positive connection between two people. It’s one of the first gestures mentioned in Henry Siddons’s 1807 Practical Illustrations of Rhetorical Gesture and Action, a manual of gestures designed for English actors that was an adaptation of a classic earlier text, Ideen zu Einer Mimik (1785), by Johann Jacob Engel of the National Theatre Berlin.

Siddons defines the handshake, an action that “joins two extremities of the human body to each other”, as:

An expression usual in friendship, benevolence, and salutation. This gesture is rich in signification, for the hand is the tongue of hearty good will.

But what do we do when the formerly benevolent handshake becomes potentially dangerous? Angela Merkel’s interior minister Horst Seehofer recently rebuffed the German chancellor’s extended hand, while Italians, reeling from the highest numbers of infections in Europe, are trying out new rules of social engagement that represent a drastic departure from their high-contact normal social gestures of kissing and embrace.

But perhaps the most extreme example comes from Denmark, where naturalisation ceremonies have been suspended because a handshake has been a legally mandated part of the ceremony since a conservative change to the law in 2018. Widely criticised at the time as an anti-immigration initiative, the law is now making hundreds wait for Danish citizenship because of the pandemic.

Does this all spell the beginning of the end of hand-shaking?

I wondered about this as I walked into a conference room at the aforementioned handshake-free event where I was to teach an improvisation workshop for drama teachers, many of whom had considerable acting experience. I had planned to lead several exercises that involved touch, including one where the participants support the weight of one another’s bodies as a means to understand their relationship as a group. Another began with a series of handshakes exchanged throughout the room.

Before we began, I decided to ask participants whether they felt comfortable touching one another. Most didn’t mind – but some did, so I adapted the workshop to remove all direct contact that might, to echo Siddons, join the human body together. I asked participants to work in groups as originally planned, but mime the handshake (and other such gestures) with a gap between their bodies.

The removal of touch had a palpable impact on the workshop, as participants struggled to maintain the gap and resist the impulse to touch one another. The German dramatist Bertolt Brecht recognised the power of performance to make the familiar seem strange – what he famously termed the Verfremdungseffekt – thereby revealing that which is hiding in plain sight of society. Indeed, the shift in focus made the familiar handshake seem strange; removing the element of touch called attention to its ubiquity within common gestures.

Replacing the handshake with a representation increased the group’s awareness of the learned impulse to perform collegiality with one another. People kept apologising for not touching one another.

The coronavirus outbreak is causing people to rethink the handshake and seek other gestures that perform similar functions without touch. The news site India Today has advocated the replacement of the (western) handshake and cheek kiss in favour of a return to the traditional namaste greeting: a slight bow with hands pressed together. Besides noting its hygienic advantages, the article championed the desi (local to the Indian subcontinent) nature of this form.

This global health crisis calls into question the role of touch in culturally specific gestures of greeting and expressions of connection. Removing the assumption that we will probably touch one another fundamentally changes the repertoire of gestures we have at our disposal. The request to “refrain from hand shaking” has the potential to significantly re-script how we perform our relationships to one another.

A global response might result in moving toward new performed gestures that redefine how we interact with one another.