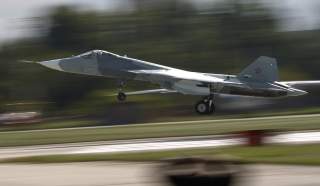 Russia's Su-57 stealth fighter is a more versatile and a better ground-attacker than America's own F-22 is, one of Russia's top warplane-designers insisted.

Neither of these things is the unqualified truth.

More importantly, neither of them would matter even if they were true. Eight years after its first flight, Russia's only stealth fighter is still just a crude prototype. Any comparison to the F-22, which has been in front-line service for 13 years and has been flying combat missions in the Middle East steadily since 2014, is purely conceptual.

"The F-22 was initially designed as an air-superiority jet, while the Su-57 was created as a more versatile aircraft from the beginning," Sputnik continued, citing Strelets. "As a result, internal compartments of the F-22 were unable to hold munitions with significant payloads."

Strelets’ claim presumes that aircraft are more versatile when they're designed from the beginning to be versatile. But experience proves that's not true. In fact, some of the most successful multi-mission warplanes began as single-mission designs and gradually evolved into additional roles.

The American F-4, F-14, F-15 and F-16 fighters all were strictly air-to-air fighters that, over time, became successful attack planes. “Our slogan was 'make it simple,'" the late Harry Hillaker, the F-16's designer, said in 1991. That philosophy resulted in a maneuverable and affordable daytime dogfighter that, with the addition of new sensors and weapons, has become the U.S. Air Force's main ground-attack platform.

The F-22, too, originally was an air-to-air fighter. But the attributes that have allowed it to excel in air combat -- namely, stealth and sustained high speed -- also lend themselves to the attack mission.

Shortly after the F-22 first entered service with the U.S. Air Force's 1st Fighter Wing in Virginia in 2005, pilots discovered something surprising. While training with satellite-guided bombs in Utah, the wing found it could accelerate its F-22s to supersonic speed at 50,000 feet and lob 1,000-pound bombs greater distances and with greater accuracy than other warplane types could do.

"Shooting down other aircraft is not what the F-22 is best at,” Brig. Gen. Burton Field, then the wing’s commander, told me. But it is what Lockheed Martin designed the plane to do. In building ground-attack capability into the Su-57 from the outset, Sukhoi is adding complexity -- and that ultimately could compromise the plane’s performance in any role.

“As the complexity of a weapon increases, its number of failure modes increases,” Chuck Spinney, the famed Pentagon reformer, explained in a 1985 paper.

In any event, the Su-57 might never get a chance to prove Strelets’ claims. While a handful of prototype Su-57s briefly deployed to Syria in early 2018 for a few highly-publicized missions, during which the fighters might have expended a small number of air-to-ground munitions, the Russian fighter is still years from full front-line service.

The Kremlin ordered its first dozen production-standard Su-57s in August 2018 and expects to form the first regular squadron some time in 2019. But with military budgets declining amid an economic slump, Moscow decided to not acquire the plane in large numbers.

The government tried to spin the decision as good news for Russia. “You know that today the Su-57 is considered to be one of the best aircraft produced in the world,” Yuri Borisov, Russia’s deputy defense minister, told a T.V. audience in July 2018. “Consequently, it does not make sense to speed up work on mass-producing the fifth-generation aircraft.” [https://thediplomat.com/2018/07/russia-will-not-mass-produce-5th-generation-stealth-fighter-jet/

The stealth fighter is “our trump [card], which we can always play when the aircraft of previous generations will start to lag behind in capabilities,” Borisov added.

A dozen Su-57s, only a few of which likely will be flyable on any given day, might be adequate for training a small contingent of pilots on the type. But Russia might not be able to deploy any of the fighters for sustained combat operations.

So it hardly matters whether Strelets is right and the Su-57 is a better attack plane than the F-22 it. The F-22 flies combat missions almost every day. The Su-57 might never do so.