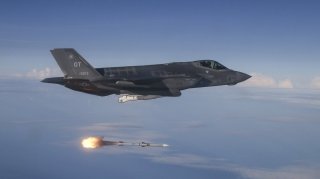 The United States Air Force has a new air-to-air missile in the works that could prove to be a game-changer. The missile, known as the Modular Advanced Missile, places a premium on long-range engagements.

Aviation Week defense editor Steve Trimble helped reveal the Air Force missile program, tweeting that the Modular Advanced Missile is a “a new air-to-air missile and the plan is to conduct a kinematic demonstration from a fighter. Trimble also tweeted that “that’s all they’re releasing right now. Not clear about seeker type, range and schedule.” It is also unclear when the “kinematic demonstration,” or test launch would happen, an event necessary for approving the missile for use on American fighters.

The first known reference to the Modular Advanced Missile appeared after the U.S. Air Force Research, Development, Test, and Evaluation Appropriations published its 2023 Fiscal Year budget request. Little about the missile can be gleaned because of the new weapon's dearth of information, though the use of “modular” in the name could hint at some desired capabilities.

It is possible that the U.S. Air Force would like to field a long-range missile customizable for various mission profiles and targets. For example, missile warheads, booster sections, and missile seeker technology could be swapped out to yield a missile for every target.

A very long-range air-to-air missile also has the potential to breathe new life into the U.S. Air Force’s extensive fleet of fourth-generation fighters. As these platforms lack the stealth capabilities of their newer fifth-generation counterparts, an ability to fire missiles from extreme ranges would be a boon to older fighters.

A long-range air-to-air missile like the Modular Advanced Missile could also be used to keep pace with the threat posed by advancements in Russian and Chinese fighters and weaponry. Though Russia has made several forays into the world of stealth fighters, Moscow lags behind Beijing in the stealth fighter realm.

China’s J-20 stealth fighter poses a threat to the U.S. Air Force like no other foreign fighter does. Part of the project’s potency lies in its origins — the project is widely believed to lean heavily on information from the American F-35 program gleaned via espionage.