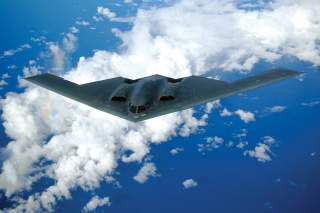 Senior Air Force leaders believe that current shortages in the U.S. bomber fleet are putting the service, and the nation, at tremendous risk of enemy attack.

The U.S. Air Force needs as many as 225 bomber aircraft to meet current and future threats presented by rivals such as Russia and China, according to Gen. Timothy Ray, Commander of Global Strike Command and Strategic Command. Speaking at the 2019 Air Force Association Air, Space and Cyber Conference, Ray said the Air Force bomber inventory needs to jump from roughly 156 up to more than 220.

The current bomber problem, Air Force developers explain, is made worse by the age of its bomber fleet; current B-2s, B-1s and B-52s are aircraft first engineered decades ago. While ongoing modernization efforts in many cases, such as the B-2, have continued to make the aircraft viable, relevant and operationally effective for years, there is broad consensus that the service is in great need of newer platforms - such as the B-21 Raider slated to emerge in the 2020s.

Interestingly, the B-2 bomber just experienced the 30-year anniversary of its first flight earlier this year. The Air Force plans to fly the bomber for at least several more decades as B-21s come online. New sensors, computer processors, weapons interfaces and radar signature reducing technologies have made the B-2 into an entirely different aircraft than it was years ago. Many believe it will remain dominant for decades to come. However, much to the dismay of many in the Air Force and DoD, there are only 20 B-2 bombers. --- For Warrior's Special B-2 30 Year Anniversary Report CLICK HERE ---

Overall, Ray explained that the current bomber predicament is compounded by a lack of bomber aircraft among U.S. allied nations. “There are not allied bombers. There are no open bomber lines to produce bombers in an operationally relevant manner,” Ray said.

Ray’s comments seem to mirror often voiced concerns among Pentagon leaders that the US Air Force may fall behind Russia and China by 2025. For this reason, many believe this can be avoided if service quickly embarks upon a sizeable expansion of its fighting technologies, weapons arsenal and major attack platforms - to include new bombers, fighters, drones, rescue helicopters and more.

Following a detailed analysis, which likely included close examination of threats, mission requirements and dangerous emerging technologies, the service detailed request to grow the service last year - from 312 operational squadrons up to 386. The largest needed increases, according to the Air Force plan, include 22 new ISR Command and Control squadrons, 7 more fighter squadrons and and 5 more bomber squadrons.

“We need 386 squadrons to get us to a lower risk posture,” Ray said at AFA.

An Air Force report from last year cites former Air Force Secretary Heather Wilson explaining it this way - the analysis supporting the 386 squadrons needed to support the National Defense Strategy is based on estimates of the expected threat by 2025 to 2030. At the end of the Cold War, the Air Force had 401 operational squadrons.

By any cursory estimation, it does not take much to notice an uptick in mission demands for the Air Force, coming on the heels of more than 15-years of counterinsurgency air support missions in Iraq and Afghanistan.

The Pentagon has sent F-35-armed Theater Security Packages to the Pacific and moved F-22s closer to the Russian border. Meanwhile, the F-35 has launched its first attacks in history and there is an incessant, ubiquitous refrain that there is consistently just not enough ISR to meet current mission demands.

Other details of the Air Force requested expansion plan include:

Meanwhile, statements from former senior Air Force leaders, Congressional analysts, observers and critics may go even further when it comes to voicing serious concerns about the service’s ability to meet anticipated threats -- calling the current situation “dangerous.” “The USAF is a geriatric force—it has bombers, tankers, and trainer aircraft over 50 years old; helicopters over 40; and fighters over 30—it has a 2000+ pilot shortage,” Ret. Lt. Gen. David Deptula, Dean of the Mitchell Institute for Aerospace Studies, told Warrior in an interview.

Deployment length is also a major factor when it comes to maxing out the Air Force’s current ability to meet global demands from Combatant Commanders, according to a RAND study, called “Is the US Flying Force Large Enough.” The study, as reported on by Warrior Maven contributor Dave Majumdar, examines four potential scenarios; two Cold War scenarios with Russia or China, a peace enforcement scenario and a counter-terrorism/counter-insurgency type scenario. “In each of the four possible futures examined, the 2017 USAF force was unable to meet the demands for all types of aircraft,” the study summary states.

No class of aircraft performed well in all four of the examined futures. Fighter aircraft came closest, and C3ISR/BM (command, control, communications, intelligence, surveillance, and reconnaissance/battle management) platforms had the biggest shortfalls, reflecting their small fleets and high demand….. The RAND STUDY

Based on this assessment, it appears no accident that the largest needed increase in the air fleet size, according to the Air Force numbers, is for ISR technology. The RAND report’s findings also include a wide area of conclusions, percentages and analytical results. One of great significance, it seems clear, is that deployments beyond one-year appear to massively over-extend the Air Force.

“When contingencies were not capped, there were only 14 cases in which the FY17 force met 80 percent or more of demands and only one case in which 100 percent of demands were met. The other 18 cases had significant, and at times extreme, deficiencies,” the findings state.

The extent to which the Air Force requests will be met remains uncertain, especially given that both the Army and the Navy also say they are dangerously under-resourced. At the same time, there is no shortage of very serious concern among Pentagon war planners that the US may increasingly be insufficiently prepared in the event of future great power war.

“Unfortunately, the Air Force has been consistently under resourced for over 20 years. As a result the U.S. Air Force is the oldest, smallest, and least ready in the entire history of its existence,” Deptula said. “We are no longer facing near-peers, but peers given the advancements in the Chinese and Russian military.”