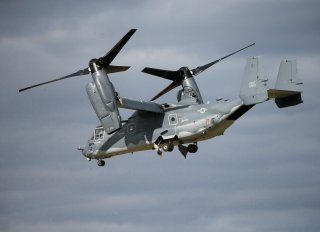 A Bell-Boeing industry team is working to maintain the Air Force Special Operations variant of the CV-22 Osprey tiltrotor to ensure continued service life and performance for the aircraft.

The work is primarily related to the CV-22’s nacelles. The nacelles on the Osprey, which could also be described as an engine casing or pod, are where the aircraft’s power production is located. The update to the nacelles ensure the CV-22 can meet performance parameters such as its ability to fly at high speeds while also operating with the ability to take off and land vertically. The upgrades also improve the maintainability of the aircraft. Securing, reinforcing, and maintaining the external engine structures helps ensure the engine is well-protected from debris, sand, or rocks.

The improvements are not only intended to help propel the Osprey for decades of continued service but also increase readiness rates so that the military can quickly deploy the aircraft for missions.

“Speed, range, and versatility have always been fundamental to the Osprey, and that includes speed of maintenance,” said V-22 program director Kurt Fuller in a press release. “The incorporated nacelle improvements help ensure the Osprey continues to outpace adversaries both operationally and sustainably.”

The press release said that improvements to the Air Force Osprey are inspiring the Navy and Marine Corps to consider nacelle improvements for their Ospreys.

Sustaining the nacelles and structure of the aircraft makes sense given Navy and Marine Corps plans for the aircraft to fly into the 2050s and beyond. The Osprey has been in demand for many years and maintained a high operational tempo for the Marines. The Navy has recently introduced its own Osprey variant to fulfill the Carrier on Board Delivery (CoD) mission.

The maintenance work aligns with several longstanding efforts to upgrade the aircraft to sustain its performance and expand its mission scope. The Osprey has also been used for airborne refueling missions.

The Osprey has been also been upgraded with a new command and control system called Digital Interoperability (DI) in recent years. This helps secure, organize and share mission-critical information for Marines or Air Force crew members traveling during an operation.