The Air Force Could Have 100 New B-21 Stealth Bombers 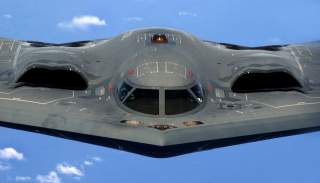 (Washington, D.C.) The B-52 will be armed with long-range, nuclear cruise missiles… the B-2 will elude the most modern air defenses and the B-1B bomber will fire hypersonic weapons -- if the Air Force’s plan for the next several decades comes to fruition.

Air Force weapons developers are immersed in an intricate plan to bring the service’s bomber fleet into future decades -- by adding weapons, avionics and networking technologies to current aircraft and moving quickly to bring new B-21 bombers to the force.

The current thinking is centered upon methods of compensating for what service leaders identify as a “bomber deficit,” and therefore finding ways to maximize the performance of the aircraft it has in the inventory.

“There are only 156 allied bombers and they all belong to us. We are working on the growth of a requirement for long-range strike,” Gen. Timothy Ray, Commander of Global Strike Command, told reporters at the Air Force Association Air, Space and Cyber Conference in September.

“You are going to have to move to the B-21, the question is…. how you do it. What is that roadmap? What I am going to do is spend the next couple of months pounding the data to understand what the realm of the possible is. We understand that many of our aircraft will have sustainment challenges in the out years, so we really need to have a cost-benefit analysis conversation,” Ray said.

While many details have yet to be determined, depending upon the pace of B-21 arrivals, there is a notional “structure” or plan to operate up to 75 B-52s up through the 2040s, sustain the B-1 for at least a decade or two and of course maintain a massively upgraded B-2. To Read Warrior's B-2 30-year Anniversary/Technology Special CLICK HERE

“Right now the current game plan is a minimum of 100 B-21s and 75 b-52s. I spent a lot of time this past year making sure that plan is a viable one. We also have to have a viable B-1 to pickup the load so we don’t put too much on the B-52. The point to drive home is that we have to be smart about what we have and build a better road map until we get bigger,” Ray added.

The success of the plan naturally hinges almost entirely upon an ability to successfully modernize the current fleet, as Ray indicated, with sensors, avionics, weapons and communications technology designed to bring the decades old bombers into future decades.

"I do believe there is a fleet that moves across a particular time period until the B-21 arrives in sufficient numbers. My preference would be that all of them have external hard points open for some carriage and an extended bomb bay,” Ray added.

There are many nuances to sustainment and modernization, including both regular inspections as well as efforts to integrate new innovations as they emerge. Tim Sakulich, Air Force Research Laboratory Executive Lead for Implementing the Air Force Science and Technology Strategy, told Warrior the Air Force S&T community is working to identify, fast-track and integrate promising new technologies onto current aircraft. Examples include lightweight composites, new weapons such as lasers and hypersonics and next-generation networking systems, among other things.

“We work on inspections to ensure performance properties are up to the requirements level. This is important because we are talking about some pretty exotic technologies that go into these platforms,” Sakulich told Warrior in an interview.

The concept, as evidenced by B-2 and B-52 modernization, is to effectively turn older airframes into platforms which could be seen as entirely new aircraft. Autonomy and AI, for instance, are quickly being woven into existing weapons platforms in a way that completely changes functionality, improves survivability and multiplies attack options.

“Networked weapons as well as systems for manned-unmanned teaming will rely upon AI. We are working to prove those out in application to assess the difference it makes in operational capability. This includes getting networked weapons out in the field and being able to get them to communicate and optimize against targets in real time in the battlespace,” Sakulich said.

The Air Force is mapping a two-fold future path for its B-1 bomber which includes plans to upgrade the bomber while simultaneously preparing the aircraft for eventual retirement as the B-21 arrives.​

These two trajectories, which appear as somewhat of a paradox or contradiction, are actually interwoven efforts designed to both maximize the bomber’s firepower while easing an eventual transition to the emerging B-21 bomber, Air Force officials told Warrior Maven. The B-21 is expected to emerge by the mid-2020s, so while the Air Force has not specified a timetable, the B-1 is not likely to be fully retired until the 2030s. Also, Ray talked about a recent demo wherein he saw the B1-B weapons bay configured to fire hypersonic weapons. -- To Read Warrior's Story on Air Force B1--B Hypersonic Weapons Plan -CLICK HERE

Service officials say the current technical overhaul is the largest in the history of the B-1, giving the aircraft an expanded weapons ability along with new avionics, communications technology and engines. The engines are being refurbished to retain their original performance specs, and the B-1 is getting new targeting and intelligence systems, service officials told Warrior last year.

A new Integrated Battle Station includes new aircrew displays and communication links for in-flight data sharing. Another upgrade called The Fully Integrated Targeting Pod connects the targeting pod control and video feed into B-1 cockpit displays. The B-1 will also be able to increase its carriage capacity of 500-pound class weapons by 60-percent due to Bomb Rack Unit upgrades. The B-1, which had its combat debut in Operation Desert Fox in 1998, went to drop thousands of JDAMs during the multi-year wars in Iraq and Afghanistan. The B-1 can hit speeds of MACH 1.25 at 40,000 feet and operates at a ceiling of 60,000 feet. It fires a wide-range of bombs, to include several JDAMS: GBU-31, GBU-38 and GBU-54. It also fires the small diameter bomb-GBU-39.

Engineers are now equipping all of the Air Force B-52s with digital data-links, moving-map displays, next-generation avionics, new radios and an ability to both carry more weapons internally and integrate new, high-tech weapons as they emerge, service officials said.

Also, Ray expressed confidence in the current effort to re-engine the B-52 with a more modern, efficient engine.

The technical structure and durability of the B-52 airframes in the Air Force fleet are described as extremely robust and able to keep flying well into the 2040s and beyond – so the service is taking steps to ensure the platform stays viable by receiving the most current and effective avionics, weapons and technologies, Air Force weapons developers have told Warrior.

The Air Force is also making progress with a technology-inspired effort to increase the weapons payload for the B-52 bomber.

The 1760 Internal Weapons Bay Upgrade, or IWBU, will allow the B-52 to internally carry up to eight of the newest “J-Series” bombs in addition to carrying six on pylons under each wing. The IWBU uses a digital interface and a rotary launcher to increase the weapons payload.

The B-52 have previously been able to carry JDAM weapons externally, but with the IWBU the aircraft will be able to internally house some of the most cutting edge precision-guided Joint Direct Attack Munitions and Joint Air-to-Surface Standoff Missiles, among others

The first increment of IWBU integrates an internal weapons bay ability to fire a laser-guided JDAM. A second increment, to finish in coming years, will integrate more modern or cutting-edge weapons such as the Joint Air-to-Surface Standoff Missile, or JASSM, JASSM Extended Range (ER) and a technology called Miniature Air Launched Decoy, or MALD. A MALD-J “jammer” variant, which will also be integrated into the B-52, can be used to jam enemy radar technologies as well.