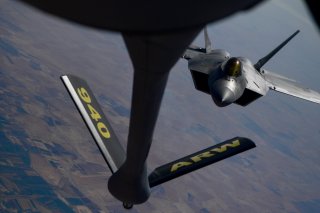 The United States Air Force is now considering private contractors to help refuel its bombers and fighters within the next two years as it faces a near-term shortage of refueler aircraft. This comes as the USAF's 2021 budget proposal calls for cutting sixteen active-duty KC-10s and thirteen KC-135s from the active and reserve fleets.

While the Air Force will continue to buy new KC-46s, it faces a gap in maintaining the current fifteen-planes-per-year rate as the new tankers are years away from being operational. Air Mobility Command (AMC), which is headquartered at Scott Air Force Base, Illinois, has called for privately operated tankers to help ease the demand for tankers as those legacy refuelers are taken out of service.

According to reports by Air Force Magazine, the service is wrapping up a feasibility study on the plan, and the goal would be to begin contract solicitation by June. AMC would expect initial operational capability within twelve months of contract award. There is no word if the recent COVID-19 outbreak would impact the timetable.

The USAF has announced that it was looking at contracting private tankers earlier this year, and an initial contract would cover about 5,000 to 6,000 hours, with the focus being on training exercise and testing requirements. That in turn would free up some tankers for combat operations and high-end training.

AMC head General Maryanne Miller has said that contracting refueling aircraft could provide greater flexibility, prove to be more cost-effective, and would preserve operational capability by allowing the Air Force to use its tankers on warfighting needs rather than on training and testing. In addition to the initial flight hours, the Air Force would like a contract that could eventually include 21,000 flying hours in training and exercises, 2,100 flying hours in test and evaluation, 2,190 hours for foreign military sales support and 900 hours for in-country "coronet" missions that include refueling fighter aircraft as they move from one location to another.

Companies submitting bids for the contract would need to have at least one aircraft capable of both boom and hose and drogue refueling. The pace of operations for the Air Force would vary, and this could include an average of three sorties per day – while the highest demand would be in the months of April, August, and October. Any contractors would also need to be able to handle the geographic requirements.

According to reports, the contract would focus on the southwestern and southeastern parts of the country, near Edwards Air Force Base in California, where there is an ongoing need for testing; and near the training ranges at Nellis Air Force Base, Nevada and Tyndall Air Force Base, Florida.

Any contractor would need to be certified after about 24 months on refueling the top priority aircraft, which include F-15s, F-16s, F-18s, B-1s and B52s; and within thirty-six months the contractor would need to be certified on the second priority aircraft including the F-22s, F-35s, A-10s. That would be followed by third priority level of aircraft that include C-130s, P8s, C-17s, RC-135s, E-3s and E-8s. Longer-term the tanks would even refuel aircraft outside of the United States.