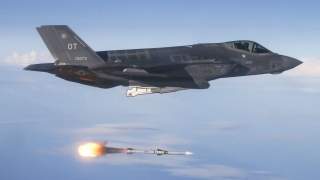 Key point: The New AIM-260 will be even better and longer-range than the old AIM-120.

The U.S. Air Force is developing a new air-to-air missile.

“It has a range greater than AMRAAM, different capabilities onboard to go after that specific threat set, but certainly longer legs,” Genatempo told Cohen and other reporters. “As I bring up JATM production, AMRAAM production is kind of going to start tailing off.”

The maximum range of the AIM-120 is classified. Experts estimate it could be as great as 100 miles.

According to The War Zone reporter Joe Trevithick, the “threat set” Genatempo referenced is “future aerial opponents riding in advanced fighter jets, such as those that Russia and China are developing and are beginning to field.”

China’s J-20 stealth fighter entered squadron service in 2018. Russia has built more than a dozen Su-57 stealth fighter demonstrators. Despite lingering problems with the radar-evading Su-57, in May 2019 Russian president Vladimir Putin urged lawmakers to order 76 copies of the plane.

Russia and China “have also been developing new, longer-range air-to-air missiles to go with those aircraft,” Trevithick noted.

The Air Force officer said that the appearance of the Chinese PL-15, which uses a dual-pulse rocket motor, in 2016 was the key factor that drove the Air Force and the Navy to begin the JATM program.

Last year, a pair of J-20s flew a particularly notable flight routine at the biennial Zhuhai air show with their ventral weapons bays open, showing a full load of four of these missiles.

There has been much speculation and confusion about what missile this nomenclature refers to over the years and its exact capabilities, but this would seem to suggest that the U.S. military is concerned that it may be close to matching, or even exceeding, the range of the latest AIM-120D variant.

Raw range, of course, isn't the only factor in air-to-air combat and the AIM-120D has a host of other advanced features ...

There is also a possibility that there remains confusion within the U.S. military about the exact nomenclature of Chinese air-to-air missiles. In late 2016, images also emerged of an even longer-range Chinese missile, which has been referred to as both the PL-15 and as the PL-21.

Two years ago there was one hint regarding the AIM-260’s existence, according to Trevithick. “The only official mention of the project that is publicly available online appears to be a notice about the assistant program manager, an employee of Naval Air Systems Command, winning an award for outstanding logisticians in 2017.”

The Air Force expects the AIM-260 program to move quickly. It’s possible the new missile could begin testing just four years after the start of development. “The weapon is initially planned to fly in the F-22’s main weapons bay and on the Navy’s F/A-18, with the F-35 to follow,” Cohen wrote. “Flight tests will begin in 2021 and initial operational capability is slated for 2022.”

The Air Force will buy its last AMRAAMs in fiscal 2026 as JATM ramps up, answering combatant commanders’ needs, Genatempo said.

He told Air Force magazine the service hasn’t settled on how many JATMs it might buy in the outyears or how the program will ramp up.

“The future of what JATM looks like, especially out in that outyear increment, is very, very up in the air right now,” Genatempo said. “As far as lot sizes go, it’s on the order of a couple hundred per lot and I don’t think we have a definite plan.”

He expects JATM could be in production as long as AMRAAM, which was first deployed in 1991.

David Axe serves as Defense Editor of the National Interest. He is the author of the graphic novels  War Fix,War Is Boring and Machete Squad. This first appeared in June 2019.