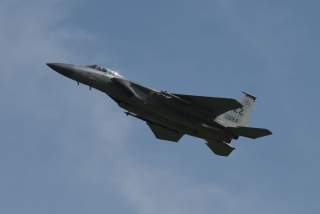 Taken on May 8, 2019 the interesting photos in this post show U.S. Air Force (USAF) F-15C Eagle fighter jets belonging to 48th Fighter Wing (FW) from RAF Lakenheath, taxing on a runway in Southwest Asia. U.S. Air Forces Central Command Airmen, Joint personnel, and Coalition partners stand ready to provide defense from any threat. These aircraft were moved within the theater to be best positioned to defend U.S. forces and interests in the region.

Noteworthy one of the Eagles portrayed in the pictures is nicknamed “Starscream” after the fictional character that appears in almost all continuities of the Transformers franchise. A graduate of the Cybertron War Academy, Starscream is a deadly high-ranking Decepticon who turns into a jet fighter, and Megatron’s second-in-command as the leader of the Seekers. In his original appearance, Starscream transforms into an F-15 Eagle.

The F-15s joined B-52 Stratofortress bombers and F-35A stealth fighters already deployed to the Middle East as well as USS Abraham Lincoln aircraft carrier deployed to the Persian Gulf. The decision to deploy military assets to region is aimed to counter Iranian threats to U.S. troops on the ground and at sea, the Pentagon announced on May 7, 2019.

A claim confirmed by U.S. Navy Capt. Bill Urban, a Central Command spokesman, who said in a statement that “U.S. Central Command continues to track a number of credible threat streams emanating from the regime in Iran throughout the CENTCOM area of responsibility.”

The escalating tensions follow an announcement last month by Secretary of State Mike Pompeo of new sanctions against any country, including U.S. allies, that imports Iranian oil, the country’s top source of income. The White House also designated the Revolutionary Guards Corps as a foreign terrorist organization, part of a hardening stance toward Iran.

Pompeo made an unannounced stop in Baghdad on May 7 to meet with the country’s intelligence and defense chiefs, among other officials. He said he wanted to discuss the new threats from Iran with Iraqi leaders.

“Iran is escalating their activity,” Pompeo told reporters en route to Baghdad. “I wanted to go to Baghdad to speak with the leadership there, to assure them that we stood ready to continue to ensure that Iraq is a sovereign, independent nation.”