The Air Force Has a Huge Basing Problem 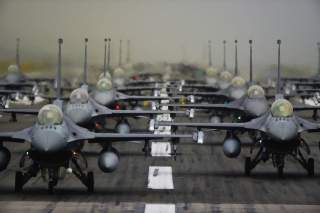 Key point: The Air Force must choose whether to have its planes based close together, which makes them more efficient but more vulnerable to attack.

The U.S. Air Force has a dilemma: it can disperse its forces to make them more survivable against Russian and Chinese missiles, but at the cost of making U.S. airpower less efficient. Or, it can centralize its operations to optimize efficiency—but turn its aircraft and bases into juicy targets.

That’s the conclusion of a new RAND study on distributed operations, in which military forces,  bases and command centers are dispersed across a wide area, and then connected and coordinated by satellites and computer networks. Over the years, the Air Force has centralized into a small number of bases. Faced with a multiplicity of Russian and Chinese long-range missiles that could potentially pulverize American installations, the Air Force is looking at spreading out across a larger number of smaller bases. At the same time, there is a push for decentralized command and control, so that if higher-level headquarters and communications are knocked out, local Air Force units can still carry out their mission.

But this raises another problem: how to supply these scattered bases. In turn, this is creating tension between field units and the logistics units that sustain them. “During discussions with USAF personnel, we heard frustrations from both the operations and support communities,” RAND says. “Operators are driving many of the concepts for distributed operations and, in some cases, are frustrated with what some perceive as resistance from the combat support communities. At the same time, some in the combat support community are concerned that the distributed operations concepts are being developed without a realistic understanding of support constraints, burdens, and resource demands they create. If the Air Force continues to develop distributed operations concepts, operators will spend more time thinking about logistical constraints while sustainment professionals will spend more time thinking about warfighting.”

Distributed operations also pose operational challenges. Overseas bases spread across more nations mean more potential political headaches. Coordinating dispersed forces means relying on communications links vulnerable to jamming and hacking. Decentralization means a local wing commander will be taxed controlling a variety of aircraft—fighters, tankers, etc.—as well as ground support functions such as logistics and base defense. As an example, RAND points to a hypothetical air wing spread across eighteen bases: “Though there is no standard span of control for military units, 18 would be far outside a wing’s typical peacetime structure of four subordinate groups (operations, maintenance, mission support, medical) and, perhaps, a handful of independent squadrons.”

A more intangible problem is force of habit. The Air Force has become accustomed to operating from secure bases during the Iraq and Afghan wars, which will certainly not be the case with Russia and China. Air units are accustomed to centralized control and coordination. As one solution to ease decentralization, RAND suggests cross-training personnel so that mechanics, for example, can service multiple types of aircraft or be pressed into base defense.

“Regardless of the concept it uses, the Air Force will have to trade efficiency for survivability in a high-end fight,” RAND concludes.  “If the Air Force pursues distributed operations, it will need more resources (e.g., combat support personnel, base defense personnel, headquarters staff, communications equipment) to support a greater number of operating locations and enable distributed control. Alternatives to distributed operations would also come with higher costs. Using airpower from more distant bases, for example, could require new acquisition programs, longer flight times, and lower sortie rates.”