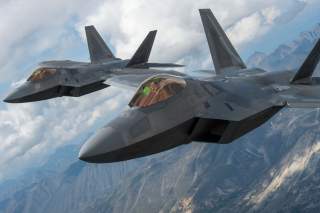 To undertake these tasks, a complex multi-axis robot system with a long carbon fiber arm to reach deep into the engine inlet ducts has been developed by Aerobotix.

This project has three goals: reducing the number of hours aircraft maintainers are required to work in confined spaces while wearing full personal protective equipment, improve consistency and overall quality of the coatings applied, and to reduce the overall hours required to restore the inlets for the lifecycle of the aircraft, said Colin Allen, an AFLCMC F-22 structures and system safety engineer at Hill AFB.

To undertake these tasks, a complex multi-axis robot system with a long carbon fiber arm to reach deep into the engine inlet ducts has been developed by Aerobotix.

Currently maintainers have to don a Tyvek suit and respirator in order to crawl into the intakes and recoat manually.

“It’s not an easy process. It’s kind of an awkward position to be in for a lengthy amount of time where the environment is actually considered a confined space here at Hill, so you need another person watching the person manually restoring the intakes,” Allen said.

“The actual removal of coatings from the F-22 inlets remains a manual process where maintainers go inside the intakes and strip the coatings using hand tools,” said Tech. Sgt. Justin Daywalt, the low observable/structures integrated support manager for the F-22 System Program Office at Hill AFB.

This innovative project has included the use of computing power using modeling and simulation to accomplish the objectives for the depot F-22 maintenance team, said Carl Lombard, a materials research engineer with the Electronics & Sensors Branch, Manufacturing & Industrial Technologies Division, Materials & Manufacturing Directorate at AFRL.

“This enables the maintainers to avoid collision with the inlets and the plane while developing the fastest paths to correctly apply the coatings,” he explained.

Noteworthy Aerobotix personnel have utilized their experience with the process to make the transition to F-22 robotic intake coating restoration as smooth as possible for all involved.

“One of the reasons Aerobotix was chosen is because they’re certainly an industry leader as far as aircraft robotics goes in their use of robotics for aircraft maintenance on the F-22 and F-35 (Lightning II) programs. They have certainly been more than accommodating, to not only the AFRL and the SPO’s needs, but also the depot’s needs, as far as maintaining their schedule and reevaluating when they need to be in the depot doing work and during the validation process,” said Allen.