Is the Air Force Retiring Some F-35 Fighter Jets Already? 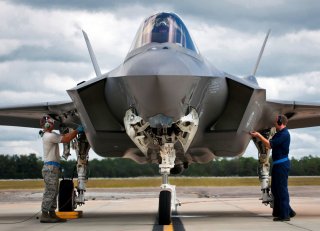 The Air Force may start to retire their oldest F-35A airfares in favor of newer, more advanced builds of the same airframe, a senior Air Force official suggested in a recent interview.

The F-35A is the conventional take-off and landing variant of the three Joint Strike Fighter types and is operated by the Air Force. F-35A airframes have continuously entered service with the Air Force since 2016, with later airframes loaded with more up-to-date software blocks than the preceding early model F-35As.

“It's not in our plans right now, but that would be something that we would have to take into consideration," Lt. Gen. S. Clinton Hinote, the Air Force's Deputy Chief of Staff for Strategy, Integration, and Requirements reportedly stated, referring to early-model F-35A retirement. ”Because the big question is, 'Are we going to go back and retrofit the F-35?’”

Although the F-35 is one of the newest airframes in Air Force service, some older airframes are kept as trainers and are not combat coded, therefore not ready for combat missions.

“It's true with a lot of our aircraft that we have some they're dedicated solely to training," Lt. Gen. Hinote explained. "We're questioning, in a new era, where training is going to look different. Perhaps we have over-invested in training aircraft, and the ratio of training to fighter aircraft could be improved on the fighter side.”

Although early-model F-35A trainer aircraft could be updated with the latest software blocks and components, the flying branch may find it easier — and perhaps cheaper — to simply retire some trainers early and accept delivery of newer, combat-ready F-35As that already have the latest software and hardware installed and ready to go.

Lockheed Martin, the F-35’s manufacturer, previously explained that the latest Block 4 capability update would implement improvements to the stealth fighter’s communications, navigation system, weapons system, electronic warfare, and data fusion. Before this latest software block can be installed, however, the airplanes would have to undergo Tech Refresh 3, which would see a new mission computer and processor installed, as well as more memory and a new pilot display.

Block 4-capable F-35s are of extremely high importance to the Air Force: in 2019 the flying branch conducted a simulated a Chinese invasion of Taiwan. During that war game, the Air Force F-35 fleet featured Block 4 F-35s exclusively, as fighters with older software and hardware just “wouldn’t be worth it,” Lt. Gen. Hinote explained.