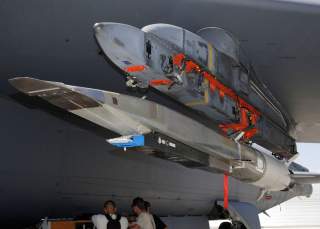 Officials of the Air Force Life Cycle Management Center at Eglin Air Force Base, announced an order worth nearly one billion dollars to the Lockheed Martin Missiles and Fire Control segment in Orlando, Fla., on Monday related to the Air-Launched Rapid Response Weapon (ARRW).

The $988.8 million contract modification asks Lockheed Martin for efforts toward ARRW critical design review, test, and production readiness support. ARRW is a technology-development project aimed at producing a missile able to move at five times the speed of sound.

The ARRW program seeks to mature critical technologies to high speed flight, and accelerate the weaponization of hypersonic strike capabilities. The hypersonic weapon is being designed to travel at 3,800 miles per hour.

The U.S. Air Force conducted the first captive flight test of the ARRW on a B-52 strategic bomber aircraft last June at Edwards Air Force Base, Calif. The aircraft carried a sensor-only version of the ARRW to gather environmental and aircraft handling data, but did not fire the weapon.

The test gathered data on drag and vibration effects on the weapon and on the external carriage equipment of the aircraft. The flight test serves as the first of many flight tests that will expand the test parameters and capabilities of the ARRW prototype.

Hypersonic weapons pose a difficult design challenge because of the intense heat, vibration, and acceleration that these munitions must withstand during flight. Hypersonic speeds impose heat on the weapon that are similar to a spacecraft re-entering the Earth's atmosphere.

This kind of thermal punishment makes it difficult, if not impossible, to place navigation and guidance sensors in the nose of the hypersonic weapon where heat is most intense. For these reasons hypersonic weapons also are nearly impervious to laser weapons in a head-on engagement.