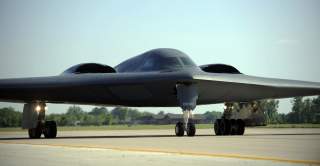 The Air Force is taking the next steps to test, develop and produce a new class of “more penetrating” bunker buster weapons to enable aircraft to destroy a new level of fortified underground targets.

Accordingly, the service is now accelerating new 2,000 and 5,000 bunker buster bombs, the A2K and the A5K, configured with a wide range of geometrical and mechanical adjustments to improve penetration and overall attack performance.

Some of the new technologies include a more penetrating steel case, improved “fusing” adjustments and a range of additional configuration changes, Air Force documents explain.

The new weapon has the same “form, fit and function” as its predecessor, the current BLU-109, yet it is engineered with a wide array of new technologies to help destroy more advanced enemy defenses.

"The intent is to use the current BLU‑109 aircraft and weapon guidance kit integration and software with only changes to the hardback, to avoid extensive aircraft or tail kit integration development, testing, and certification," the service states.

Earlier this year, the Air Force conducted 40-ft test drops of a live A2K penetrator warhead at Eglin AFB, to collect data and assess new configurations, according to a service news report.

Part of improved fusing and configuration designs, according to Hasse, is consistent with a broader Air Force effort to modernize air-dropped bomb technology; the service is evolving a “Dialable Effects Munition” program which draws upon a handful of emerging technologies to enable targets to alter the “yield” or explosive impact of a bomb while in flight.

This involves the use of alternative fusing configurations which can, as program, detonate a portion of the warhead or create a larger blast, depending upon mission requirements. This kind of newer technology could, of course, integrate into a large penetrator warhead in the even that new intelligence changes the explosive yield needed to destroy a particular target. “Variable Yield,” as its called, is now being applied across the service’s bomb inventory. When it comes to penetrators, a fuse could be programmed to detonate at varying depths and with a adjustable explosive blast - depending upon target requirements.

Available Air Force information explains that some of the A2K developments have been refined through the service’s Legacy Warhead Improvement program; this effort includes engineering a "fuze protection ring assembly was developed and implemented into Air Force production. Improvements to the aft-closure plate, fuze well assembly, and small eutectic rings and other sub-components were also developed through these programs.”

B-2 Bomber: The World's Most Dangerous Aircraft Is About to Get a Serious Upgrade