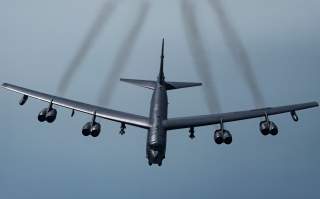 The new pylon would allow the B-52 to carry any of the air-launched munitions in the USAF inventory up to the 22,000 lb Massive Ordnance Air Burst (MOAB) bomb.

According Jane’s the U.S. Air Force (USAF) is looking to quadruple the weight of bombs that the Boeing B-52H Stratofortress is able to carry externally.

The current external wing pylon on the B-52H bomber in fact can only carry weapons up to 5,000 lbs and the service is seeking a new external weapons pylon that can carry up to 20,000 lbs of weapons.

“The current Improved Common Pylon (ICP) … was designed in 1959 and has been in service since the 1960s. When it was introduced, there wasn’t a requirement nor did anyone foresee a need to carry weapons heavier than 5,000 lb. It was modified in the late 1990s … and has performed exceptionally well … [but] it has limitations when it comes to heavy weight capacity. With current heavy weapons exceeding 5,000 lb there is a new requirement for a replacement external carriage pylon assembly,” the Air Force Materiel Command (AFMC) said in a request for information (RFI) issued on Jun. 21.

The RFI provided no details as to planned costs and timelines for the pylon upgrade, except to say that the total effort from development to fielding should be accomplished between 36 and 72 months.

The new pylon would allow the B-52 to carry any of the air-launched munitions in the USAF inventory up to the 22,000 lb Massive Ordnance Air Burst (MOAB) bomb.

Noteworthy, as we have previously reported, the B-52H fleet has already been upgraded with Conventional Rotary Launchers (CRL) last November. CRLs are improved munitions equipment that allows B-52 Stratofortresses to carry a selection of different conventional smart weapons or GPS guided weapons.

The B-52 can carry nuclear or precision guided conventional ordnance with worldwide precision navigation capability. In a conventional conflict, the B-52 can perform strategic attack, close-air support, air interdiction, offensive counter-air and maritime operations.