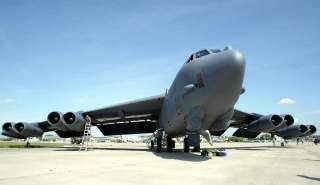 Key point: There are many roles the B-52 could play in fighting Chinese forces trying to seize Taiwan.