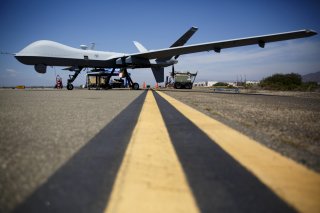 It may not be super stealthy or hot off the production line, but the Air Force MQ-9 Reaper will live to fight another day, as the service continues to expand deployments and forward positioning of the drones in Europe, ensure the maximum deterrence against Russian maneuvers through persistent surveillance and refine multi-node information sharing and interoperability with allies.

Although Congress stopped the Air Force from retiring the drone, the service continues to find new life and utility for the drone through a series of upgrades and warfare enhancements, such as the addition of new weapons, upgraded sensors, greater autonomy and extra fuel tanks.

“The Reaper is very popular with commanders, but you can’t have a complete fleet of Reapers. The MQ-9 won’t necessarily survive in a contested environment, so there will be a balance there,” Air Force Chief of Staff Gen. Charles Brown told reporters at the 2021 Air Force Association Symposium.

Citing the Reaper in the context of the Air Force’s now underway ISR 2030 game plan, Brown was explained that the service is amid a detailed examination of what drone assets might most be needed surging into the future. While there is much consensus that smaller drones, drone swarms, and stealthy drones might drive future demands for ISR, there is still a decided and impactful role for larger-platform drones such as the Reaper.  Not only has upgraded sensor technology evolved to the point where much longer-range, higher image fidelity and resolution cameras are able to integrate onto drones will much less weight and drag impediments, but it can enable broader cross-domain, multinational networking.

Reapers, which have recently acquired the ability to fire AIM-9X air-to-air missiles and added new air-dropped bombs, are now operating in Romania to enable allied collaborative operational data sharing and expand surveillance missions closer to the Russian border and near the Black Sea.

“The Black Sea remains an incredibly vital area, given our competition in that particular part of the world. The location of the MQ-9s starts with assuring our partners that we are there and that we are with them. MQ-9s will help ensure we are able to get a better understanding of our operational environment, ultimately affording us the ability to be able to compete in a manner that gives us the persistence we need,”  Gen. Jeffrey Harrigian, Commander, U.S. Forces Europe, and Africa, told reporters at the AFA symposium. “We have MQ-9s in Poland as well, and we have had those up in the Baltics and demonstrated that we could operate up there and be very effective in terms of the reach they provide.”