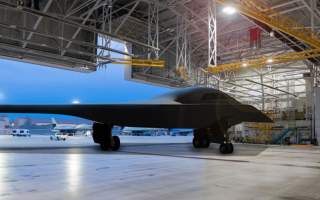 Key point: The Air Force still is mulling how many B-21s to buy.

The illustrations reveal some of the new bomber’s unique design details.

The artist’s concepts appeared on the social media accounts of Air Force Global Strike Command. The images all are similar, each depicting a computer-generated B-21 in a real photo of a hangar.

The renderings are much more detailed than the first artist’s conception of the B-21 that the Air Force released in 2015 when it awarded Northrop Grumman the contract to develop the new bomber.

That first artwork depicted a bomber that is similar in shape to Northrop’s much older B-2 stealth bomber but apparently smaller than the 172-feet-wingspan B-2 is.

That concept also revealed the most obvious design difference between the B-21 and the B-2, namely the B-21’s simple, W-shape trailing edge. The B-2’s trailing edge features a prominent dogtooth.

David Cenciotti at The Aviationist highlighted the main features that are evident in the new concepts. “The B-21 features different inlets configuration and blended conformal engine nacelles,” Cenciotti wrote.

“The [main landing gear] and nose gear doors are different,” Cenciotti continued. “In particular, the MLG doors are not trapezoidal but show serrated edges, whereas the nose-gear door is serrated and not attached to the gear leg but on the right side of the bay.”

The B-21’s inlets in particular are notable, Joseph Trevithick and Tyler Rogoway explained at The War Zone. The Raider’s inlets appear to be deeply buried in the plane’s fuselage. They could afford the bomber a high degree of stealth.

But they also represent a challenge for Northrop’s engineers. “Flush and blended inlets, in particular, are notoriously challenging and complex to realize, since they can cause various airflow problems for an aircraft's engines buried deep inside the fuselage,” Trevithick and Rogoway wrote.

John Tirpak at Air Force Magazine noticed another difference between the B-21 and the B-2.

“The underside depth of the center body, or the ‘keel,’ of the flying wing, is similar to that of the B-2,” Tirpak wrote. “However, the upper surface shows a shorter fairing into the rear of the aircraft behind the cockpit, perhaps indicating that USAF left out accommodation for a third crewmember.”

“The B-2 was provided with an ejection seat opening for a third crewmember, should that have ever been required, but no such crew station was ever installed there,” Tirpak explained, “The space is used instead by the pilot or mission commander for catnaps during 40-plus hour missions.”

Wilson told the audience he in recent weeks visited Northrop’s facilities in Melbourne, Florida, where he was “looking at the B-21.” Northrop is “moving out on that pretty fast.” Wilson said, adding he has an app on his phone “counting down the days … and don’t hold me to it, but it’s something like 863 days to first flight.”

“That would put the first flight of the B-21 in December 2021,” Tirpak noted. “The Air Force has said from the beginning that the first B-21 would be a ‘useable asset’ but has also said it doesn’t expect an initial operating capability with the B-21 before the ‘mid-2020s.’”

The Pentagon expects a single B-21 to cost around $600 million.