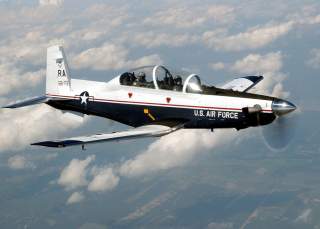 With a strong legacy to uphold, the 37th FTS continues its mission to create pilots and will use this newly painted T-6 to reach the next generation of aviators, giving them the opportunity to connect with their heritage and build the future.

The 14th Flying Training Wing (FTW) unveiled its first of six heritage flag ship aircraft during a ceremony at the fire department on May 30, 2019 on Columbus Air Force Base (AFB), Mississippi.

Members of the 37th Flying Training Squadron were able to see their freshly painted T-6 Texan II which represents the squadron’s patch, a Bengal tiger mother with a cub in her mouth. The T-6 is primarily yellow and its black stripes represent their lineage and heritage at Columbus.

“This is about having pride in our unit and across the base as a whole,” said Lt. Col. William Free, 37th FTS commander. “Now that the plane is finished up and painted it will be an opportunity for people to come together to honor and celebrate the great traditions that we have at Columbus AFB and the squadrons that are represented.”

“People take great pride in these planes so when all six planes are done they will be the showcase of flying operations on our base representing the history of our squadrons and the heritage that we bring,” said Col. Derek Stuart, 14th Operations Group commander.

The 37th FTS has a strong line of heritage that dates back to the Army Air Corps in the 1940’s. It was initially a pursuit squadron assigned to the 55th Pursuit Group at Hamilton Field, California. Air defense was their mission and they flew the P-43 Lancer, a U.S. Army Air Corps aircraft. Today this similar mission is owned by the North American Aerospace Defense Command (NORAD) and they’re responsible for controlling and defending airspace in the Alaska, Canada and the Continental United States.

During World War II, the 37th Fighter Squadron conducted combat operations with their P-38 Lightning in the European and Mediterranean Theater of Operations. They also utilized the P-47 Thunderbolt to escort reconnaissance aircraft during Operation Dragoon, earning the squadron a Distinguished Unit Citation for their actions.

Also during WWII, Maj. William L. Leverette, the 37 Fighter Squadron Commander, was awarded the Distinguished Service Cross for leading a formation of P-38s on a mission to protect Royal Navy warships. During this mission he identified a formation of 30 German JU-87 Stuka dive bombers in which he took out seven of those aircraft and his squadron shot down an additional nine.

After WWII the 37th FS was inactivated and redesignated several times. In November 1952 they were designated as the 37th Fighter-Interceptor Squadron at Ethan Allen AFB, Vermont, where they flew P-51 Mustangs and later F-86 Sabres and F-102 Delta Daggers for their interceptor mission. The squadron would again deactivate May 1, 1960.

On Mar. 22, 1972, the squadron was redesignated the 37th FTS and assigned to the 14 Flying Training Wing on Columbus AFB. Here they conducted Undergraduate Pilot Training with the T-37 Tweet, a small twin-engine jet trainer which flew for decades as the primary trainer for the U.S. Air Force. They continued to fly the T-37 until 2006 when they transitioned to the T-6 which they fly today.

With a strong legacy to uphold, the 37th FTS continues its mission to create pilots and will use this newly painted T-6 to reach the next generation of aviators, giving them the opportunity to connect with their heritage and build the future.

These paintings are also part of the Air Force chief of staff’s initiative to revitalize squadrons and enable them to connect to the long blue line.

In order for squadrons at Columbus AFB to have flag ship paint schemes, they identified aircraft that were already in need of a new coat of paint, thus not costing the Air Force any extra funding. The heritage repaint of the T-6 and future aircraft repaints were approved at the wing level and then routed and approved by Air Education and Training Command.

Aircraft paint requires a lot of hard work on the part of our mission partner, Vertex Aerospace. Maintainers began stripping paint and preparing the aircraft for a fresh coat during many labor-intensive hours where aircraft panels and doors are removed, cracks are filled, sand blasting is done, to ensure the surface is clean and free debris.

Stuart said for a lot of the Vertex maintainers this was a new and exciting project to work on, and one they enjoyed and know the entire base population will appreciate.

Free added a lot of hard work and dedication went into making this T-6 look as good as it does.

“Our instructor pilots are the heartbeat of what we do here at Columbus AFB,” Free said. “On behalf of all them it is a proud moment for me to see this jet and acknowledge the pride we have in it and knowing it represents the hard work they do day in and day out for our Wing and our Air Force.”

With each flag ship aircraft representing the rich history behind the flying squadron and connecting the different generations of Airmen, Columbus AFB is helping to preserve their predecessors’ stories and marking a new chapter for the 14th FTW.