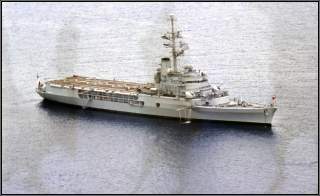 Key Point: British aviation ships after the Tigers have one thing in common. They’re carriers first, with no heavy weaponry to get in the way of their flight decks.

Starting in the 1960s, the world’s leading navies experimented with a new kind of warship. Heavily-armed and sporting huge flight decks for helicopters, the vessels were hybrids—not quite cruisers, not quite aircraft carriers.

From their advent in the 1890s through World War II, cruisers—bigger and better-armed than destroyers, smaller and faster than battleships—were screening, scouting and escort vessels. The development of helicopters in the late 1940s and early 1950s promised to expand the cruiser’s roles to include anti-submarine warfare and amphibious assault.

The French were the first to seize upon this opportunity. In 1961, the French navy took the basic design of a Colbert-class anti-aircraft cruiser and added a 200-foot flight deck, a hangar below that and an aft elevator connecting the two. The resulting cruiser Jeanne D’Arc, commissioned in 1964, was the first of her kind—smaller and more heavily-armed than an aircraft carrier, but with more aviation capacity than a traditional destroyer or cruiser.

She saw combat just once. In 2008, Somali pirates kidnapped 30 people aboard the French yacht Le Ponant. Jeanne D’Arc was part of the rescue force. French agents paid a ransom to free the hostages. And then Jeanne D’Arc promptly launched a Gazelle helicopter that chased down the fleeing pirates and recovered the money.

In building its own helicopter cruisers, the Italian navy made the mistake of going small. Andrea Doria and her sister ship Caio Duilio, both commissioned in 1964, displaced just 6,500 tons. Their aft flight decks were a modest 100 feet in length—adequate to support just four Sea King anti-submarine helicopters.

On the other hand, the Andrea Doria class boasted startlingly heavy weaponry for anti-sub vessels of their size—40 long-range surface-to-air missiles plus guns and torpedoes.

Still, Rome wanted a bigger helicopter cruiser and, in 1969, commissioned Vittorio Veneto, a variant of the Andrea Doria class displacing an extra 1,000 tons. Vittorio Veneto could support as many as nine Huey-size helicopters.

As happened in pretty much all navies, planners in the Italian navy conceded that aviation ships should emphasize flight ops over other activities. The Andrea Doria left service in 1991 and Vittorio Veneto followed in 2003.

The light carrier Giuseppe Garibaldi served as a replacement for the three until the assault ship Cavour joined the fleet in 2004 … and Giuseppe Garibaldi bowed out nine years later. The 24,000-ton Cavour’s biggest asset is her 800-foot flight deck, capable of supporting a dozen large helicopters plus eight Harrier jump jets.

In 1967 and 1968, the Soviet navy commissioned Moskva and Leningrad, which like Jeanne D’Arc sported the front half of a traditional cruiser with a large aft flight deck supporting as many as 18 helicopters.

The Moskva-class vessels, each displacing 17,000 tons, were primarily anti-submarine ships. Sailing from the Black Sea into the Mediterranean and the Atlantic, their main mission was to protect Soviet ballistic-missile subs from NATO’s hunter-killer subs.

The copters were the cruisers’ main sub-hunters, but the vessels backed up the rotorcraft with torpedoes and anti-submarine mortars of their own. The helicopter cruisers also packed 48 surface-to-air missiles and four 57-millimeter guns.

The ungainly, front-heavy Moskvas reportedly handled poorly in rough seas. The Soviets complemented the Moskvas with four much larger Kiev-class ships during the 1970s and ’80s—and then decommissioned the two older ships in 1991.

Remarkably, the 45,000-ton-displacement Kievs were more carrier and more cruiser. They supported roughly as many helicopters as the Moskvas did, but also added a dozen vertical-takeoff Yak-38 light fighters plus heavier missile armament.

As budgets crashed in the 1990s, the Russian navy opted to decommission the Kievs and maintain the fleet’s only full aircraft carrier, the long-suffering Admiral Kuznetsov. Like the French had done, the Russians recognized that carriers shouldn’t pretend to also be cruisers.

It’s worth noting that when India bought one of the old Kievs back in 2004, it paid Russia to rebuild the ship with a bigger flight deck and less weaponry, belatedly transforming the old aviation cruiser into an actual aircraft carrier.

The rework proved difficult. Tiger and her sister ship Blake returned to service in 1972 and 1969, respectively—and served for just a few years, supporting four Sea King helicopters on anti-submarine patrols.

The Royal Navy replaced Tiger and Blake with four Invincible-class assault ships starting in the mid-1970s. Twice as heavy as the old cruisers—and with 680-foot, full-length flight decks—the Invincibles could embark up to 22 aircraft including Sea Kings and Harriers.

London considered reactivating the old Tigers during the 1982 Falklands War to help support Harrier ops, but ultimately concluded that the ships were too old, too small and too expensive owing to their aged, manpower-intensive systems.

Today the Invincibles are gone—the Harriers, too—and the Royal Navy relies on the solitary assault ship Ocean to sustain at-sea helicopter flights until two new Queen Elizabeth-class carriers enter service starting around 2020. British aviation ships after the Tigers have one thing in common. They’re carriers first, with no heavy weaponry to get in the way of their flight decks.

After World War II, the Japanese navy gave up its aircraft carriers and reorganized into a strictly defensive force whose main mission is protecting the Japanese islands from submarine blockade.

In 1961, Tokyo proposed to build a class of small helicopter carriers, each displacing around 10,000 tons and embarking 18 anti-sub copters. But the so-called “CVH-B” ship startled the country’s pacifist opposition groups—it was too similar to an offensive carrier.

So instead, the navy began building large helicopter destroyers that could support small numbers of rotorcraft without appearing to revive Imperial Japan’s flattop fleet. Two Haruna-class helicopter destroyers—7,000 tons, room for three copters—entered service starting in 1973 and decommissioned in 2011.

But what Japanese defense planners really wanted was dedicated helicopter carriers—bigger and optimized for flight ops. The result was the Hyuga class—two 19,000-ton carriers with 650-foot, full-length flight decks and capacity for 18 helicopters that began joining the fleet in 2006. The even bigger Izumo class is under construction.

Tokyo sidestepped the political opposition by calling the Hyugas and Izumos “helicopter destroyers.” In the past, that designation made sense, as many copter carriers truly were cruisers, too.

Today, the half-cruiser-half-carrier of the mid-Cold War is a historical curiosity. The carrier half of the concept rightly took over.

This article first appeared on February 28, 2015. It is being republished due to reader interest.