Airborne Powerhouse: The LMXT is Way More Than Just a Tanker 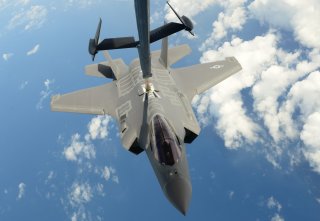 The outcome of any kind of major power confrontation with China in the Pacific would likely rely heavily upon air supremacy and the country able to operate with greater combat success in the sky. Amphibious assaults or surface attacks, along with any prospect of ground operation, would require substantial air superiority, a circumstance that highlights the need for tanker aircraft. The ability to refuel an aircraft over the Pacific could enable amphibious operations to succeed in shore attacks unimpeded by enemy air power or permit safe passage of land forces once ashore.

These are all likely reasons why the U.S. Air Force is moving quickly to develop its KC-Y interim tanker program. The program was designed in an effort to build and deploy an operational interim solution to meet pressing operational needs until sufficient numbers of the KC-46 Tanker become available.

Lockheed Martin is offering its LMXT tanker platform, a militarized variant of the already operational Airbus Multi-role tanker A330 MRTT aircraft. The rationale here is to offer something upgradeable, that can be produced quickly and is ready for operational service. The LMXT also draws upon extensive amounts of advanced automation and “fly-by-wire” technology to enable semi-autonomous operations. This increases speed and efficiency, lowers the cognitive burden placed on crews, and positions the aircraft to be easily upgraded through software enhancements.

When considering the Air Force’s KC-Y Bridge Tanker program and the need for extended combat range across dispersed areas such as the Pacific, one might be inclined to view large, fixed-wing tanker aircraft as non-stealthy and therefore much more vulnerable to enemy fire.  Is there a way that these aircraft can be survivable enough to support extended operations as needed in a high-threat airwar environment?

This is a very real question, as large fixed-wing tankers would need to launch from land locations within reach of carrier strike groups seeking to extend the combat radius of their carrier air wing.  There are some interesting ways through which larger fixed-wing tankers such as LMXT could mitigate risk while still performing a critical mission. The vulnerability of these kinds of aircraft can be greatly offset by having fighter jets fly alongside and guard or protect the tankers. An LMXT could also quite possibly increase survivability by operating drones from its cargo bay and relying upon multi-mission computing, avionics, and digital architecture to take on a wider range of missions.

A 2016 study in the Air Force Institute of Technology, called “Effectiveness Based Design of a Tactical Tanker Aircraft,” explains that tanker mission range and scope can be massively extended in high-risk areas by “defensive counterair combat patrols.”

These kinds of protections would be key in a Pacific engagement given that potential enemies such as China now have more long-range sensors, drones, weapons, and space assets they could draw upon to deny U.S. forces access to its coastline. Additional reach enabled by tankers could enable cargo planes to deliver supplies, ammo, or troops across much greater distances and F-35s could leverage their Intelligence, Surveillance, and Reconnaissance (ISR) and networking capabilities across a wide combat area.

Lockheed Martin developers say the LMXT can offload as much as 60 percent more fuel than a KC-46A and grows that gap to 150 percent at 3,000 nautical miles.

In this respect, the LMXT could support and refuel carrier-launched F-35Cs as well as land-based fixed-wing assets needing to expand mission scope across vast areas of operation.

Building the LMXT for multi-mission sensing, data transmission and reconnaissance makes sense in many respects and has some precedent with the KC-135 which was itself used to a certain extent for these kinds of functions as well. Further, a Department of Defense (DoD) report from 2020 says that tankers can provide critical support to short-take-off-and-landing aircraft needing to take-off with less fuel due to the absence of a runway.

Given that the LMXT would need “land basing” throughout the theater, there are some interesting ways in which protective strategies can be employed, according to a paper from Air University at the Air Force Research Institute. The paper, titled “Basing Strategies in Air Refueling Forces in Anti-Access/Area-Denial environments,” specifically takes up the issue of pursuing offensive operations against China in the Pacific.

“US operations can impose great uncertainty on enemy command systems by degrading the fidelity and velocity of their ISR and command, control, and communications systems and by protecting forces through sheltering, deceptive basing, and/or maneuvering them faster than they can be tracked. These actions would increase and exploit the inescapable reluctance of enemy commanders to take shots at uncertain targets with weapons that are in short supply and that must be husbanded in consideration of broader strategic concerns,” the paper states.

A properly based, sheltered, and shielded LMXT, perhaps even escorted by armed fighter jets, could operate air assets at massively expanded ranges. It might also fall within the realm of possibility to arm an LMXT with air-dropped bombs or even cruise missiles or air-to-air munitions. The Air Force is already testing air-launchers built into cargo aircraft carrying palletized weapons racks for potential aerial attack. With these kinds of applications, cargo planes and tankers can operate with built-in launchers able to fire weapons or drop bombs. Senior Air Force leaders say it only makes sense to widen the combat functionality of these kinds of aircraft, given that they are already enemy targets. Should a tanker perform an aerial bomb-drop mission, cargo or ammunition supply delivery, or sensor-driven aerial reconnaissance while networked throughout the force, other fixed-wing aircraft might not need to fly, a scenario which of course reduces operational risk.