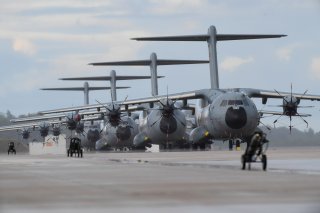 Airbus recently showcased their new Future Combat Air System, a radical idea for launching groups of drones out of the back of airborne cargo planes.

“During a recent test, an A400M [military transport aircraft] deployed a drone from its opened rear cargo ramp door whilst airborne, validating its ability to air-launch drones. In the future such unmanned aircraft, called Remote Carriers, can serve as force multipliers for various missions while keeping the pilots out of harm’s way,” said Airbus.

Later, Airbus stated, “During the A400M flight test, an Airbus-built Do-DT25 drone, acting as a surrogate Remote Carrier, was released over a test range in Northern Germany. Shortly after the launch, the drone’s parachute opened, delivering it safely to the ground. Throughout the test, the drone was connected and transmitting data to the A400M ‘mother aircraft.’”

“This data transfer illustrates how Remote Carriers can be connected to a combat cloud network, providing vital information by serving the role of “eyes and ears” over the battlefield, whilst also enabling them to be tasked by the manned aircraft’s operators during their missions.”

For example, the Air Force Research Laboratory’s Strategic Development Planning and Experimental office’s Rapid Dragon program is experimenting with dropping long-range stand-off munitions from pallets. As a result, airplanes like the C-17 and C-130—without any modifications—could transform into long-range gunships, able to bring a lot of firepower to the fight in a relatively short amount of time.

Though not capable of supersonic sprints like fighter jets, cargo planes can take advantage of long combat ranges—an especially important asset in places like the Indo-Pacific, where the tyranny of distance is difficult to overcome.

The type of ammunition the U.S. Air Force is experimenting with is particularly well-suited to a palletized application. The missiles, called JASSM-ER, are stealthy long-range weapons capable of hitting targets 1,000 kilometers away.