Airport Security May Soon Get Much Faster 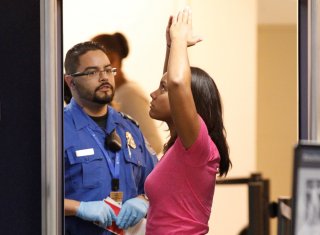 Anyone who remembers the 9/11 attacks remembers that in the months and years afterward, airport security got a lot more stringent, not to mention much slower. Further restrictions, from removing shoes to limiting liquids, followed in the coming years.

Now, it appears that changes are on the way that could make airport security lines move much more quickly.

Per Axios, there’s a possibility that within the next decade, “passengers will be able to sail through a virtually invisible screening portal without stopping… that means shoes stay on, electronics stay in the bag and pockets don't have to be emptied.”

The 3D scanners that arrived three years ago were one step towards a faster airport experience, although they’re not yet available at every airport. However, the Transportation Security Administration (TSA) is working on an “innovation task force” that is examining new ways to make airport security lines faster and less unpleasant.

Possible technologies of the future include airport kiosks with facial recognition technology, as well as new shoe-scanning technology, “enhanced, high-definition body scanners,” and technology that can “differentiate powders from liquids in baggage.”

Further down the line, possible innovations include what has been described as “walk-through screening systems,” although security experts say such innovations are likely ten to fifteen years off.

“The challenge for airports and TSA officials is to balance the need for enhanced security with consumers' desire for a pleasant and seamless travel experience,” Axios said.

Back in May, the TSA reported an uptick in people bringing guns to airports, with 120 firearms turning up at airports in the last week of April, including more than thirty in one single day. And more than 80 percent of the weapons found were loaded.

“It really is a fairly substantial increase,” Darby LaJoye, the acting head of the TSA, told The Hill in an interview. “When you measure it against per millions, it was double last year than what it was the year prior.”

The guns, however, are not necessarily being brought with ill intent.

“This is a public safety concern because as I pointed out, 80 percent of them are loaded, they’re often just thrown at the bottom of a bag,” LaJoye told lawmakers this spring. “The excuse we generally get the most often is they simply forgot it was in there.”

As we wrote in April, “a loaded or unloaded firearm with accessible ammunition, found at a checkpoint or on a plane can carry a fine between $3,000 and $10,000 and a criminal referral. Slipping up a second time has fines range from $10,000 to $13,910.” It’s not clear how many of the people caught with guns at airports have faced criminal charges.