Alexandria Ocasio-Cortez Has a Plan to Transform the Democratic Party 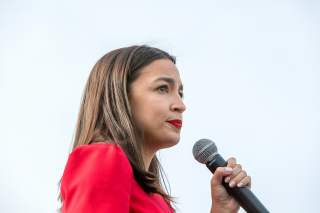 Today Rep. Alexandria Ocasio-Cortez (D-NY) will endorse a slate of Democratic primary challengers in an attempt to wrestle more political control out of the hands of the party establishment in an attempt to move the party membership left. The thirty-year-old democratic socialist has been a national figure since June 2018 when she successfully defeated Democratic Caucus Chair Joe Crowley in his own primary.

Using the money she’s fundraised through her star power, and that would be wasted using in her own safe district, Ocasio-Cortez created a political action committee called Courage to Change to distribute money and momentum to progressive candidates across the country.

“One of our primary goals is to reward political courage in Congress and also to help elect a progressive majority in the House of Representatives,” the congresswoman told The New York Times. “There’s kind of a dual nature to this: One is opening the door to newcomers, and the other is to reward members of Congress that are exhibiting very large amounts of political courage.”

Ocasio-Cortez’s efforts are similar to that of Justice Democrats, the political action committee founded in 2017 by former members of the Bernie Sanders campaign and progressive media personalities Kyle Kulinski and Cenk Uygur. In the 2018 midterm elections, Justice Democrats endorsed seventy-nine candidates, twenty-six of whom won their respective primaries. The four freshman Democrats who were elected to the House out of this group formed “the Squad.” They are Ocasio-Cortez, Ayanna Pressley of Massachusetts, Rashida Tlaib of Michigan, and Ilhan Omar of Minnesota.

All four of those first elected by Justice Democrats took over safe seats already held by Democrats. Likewise, Ocasio-Cortez’s new PAC puts a special focus on primary challengers. The goal is not necessarily to grow the party, but to systematically change it. And voters are expected to feel more comfortable voting for more progressive candidates if they feel the Republican nominee is not competitive.

Two incumbents who are set to be primaried from their left are Rep. Daniel Lipinski of Illinois and Rep. Henry Cuellar of Texas. Lipinski is one of three remaining pro-life Democrats with political stature, and Cuellar opposes gun control. Cuellar has been endorsed by Speaker of the House Nancy Pelosi, while his opponent, Jessica Cisneros has been endorsed by presidential candidates Elizabeth Warren and Bernie Sanders.

Other candidacies receiving support are three Democrats running for open seats, a second bid for a Republican congressional district in Nebraska, and one of the candidates challenging Senate Majority Whip John Cornyn in Texas. All of the current endorsees are women.

“While I think sometimes a lot of people see this as a huge amassing of influence or power or money or what have you, my personal experience does not feel that way — it can feel very lonely,” continued Ocaso-Cortez to the Times. “I think my ambition right now is to be a little less lonely in Congress.”