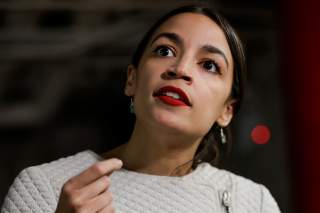 New York Democratic Rep. Alexandria Ocasio-Cortez’s chief of staff, Saikat Chakrabarti, has departed from her D.C. office to work with an outside group focused on pushing the Green New Deal, her office announced Friday.

Also departing from Ocasio-Cortez’s D.C. office is her communications director Corbin Trent, who will head communications for her 2020 re-election campaign.

“Saikat has decided to leave the office of Rep. Ocasio-Cortez to work with New Consensus to further develop plans for a Green New Deal,” Trent told The Intercept. “We are extraordinarily grateful for his service to advance a bold agenda and improve the lives of the people in NY-14. From his co-founding of Justice Democrats to his work on the Ocasio-Cortez campaign and in the official office, Saikat’s goal has always been to do whatever he can to help the larger progressive movement, and we look forward to continuing working with him to do just that.”

Chakrabarti told a Washington Post reporter in July the Green New Deal “wasn’t originally a climate thing at all.”

“We really think of it as a how-do-you-change-the-entire-economy thing,” he said.

Chakrabarti came under fire in March after the Washington Examiner reported that his two PACs had funneled over $1 million into an LLC he controlled.

Ocasio-Cortez was granted a position on the board of Justice Democrats in late 2017 while the PAC was simultaneously supporting her primary campaign. But she never reported her affiliation with the PAC with the Federal Election Commission (FEC).

Ocasio-Cortez’s relationship with Justice Democrats has prompted at least three FEC complaints against her campaign.

Chakrabarti’s conduct as Ocasio-Cortez’s chief of staff became the subject of ire from the moderate wing of the Democratic party.

In late June he accused moderate Democrats of the Blue Dog Caucus of being “hell-bent to do to black and brown people what the old Southern Democrats did in the 40s.”

The Twitter account for the House Democratic caucus fired back at Chakrabarti in July for his attack on Davids.

“Who is this guy and why is he explicitly singling out a Native American woman of color?” House Democrats tweeted.

“Her name is Congresswoman Davids, not Sharice,” the now-deleted tweet read. “She is a phenomenal new member who flipped a red seat blue.”