Alexandria Ocasio-Cortez Wants To Make Us All Poorer 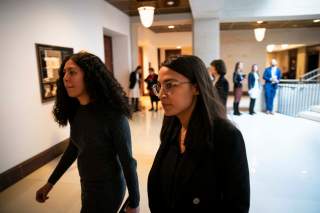 “You didn’t make those widgets,” she added. “You sat on a couch while thousands of people were paid modern-day slave wages … [and] are literally dying because they can’t afford to live.”

This latest rant continued her war on the entrepreneurs and the capitalist system responsible for creating the most widespread economic abundance and highest quality of life in the history of mankind.

Ocasio-Cortez refuses to acknowledge that in a free society, individuals become wealthy by meeting customer needs. Wealth and economic output expands—or shrinks—based on a combination of human ingenuity, labor, natural resources, and capital investment. Few wealthy people get that way from plundering others. They create wealth by bringing to market products that benefit others.

Consider an apple orchard. Apple trees are the capital asset; apples the product. Forcing an orchard owner to convert some of the trees to firewood would deplete the supply of capital (apple trees) and diminish future economic output (apples). Confiscating the net income of the orchard owner would leave less capital to expand for the owner and less growth for the economy.

Income taxes or the wealth taxes proposed by Ocasio-Cortez and other progressives yield the same results across an entire economy—less economic output and lower future growth.

In prior generations, businesspeople and inventors such as Henry Ford and Thomas Edison earned fortunes by improving the lives of others, but those fortunes reflect only a small fraction of the value added to society by their innovation. To punish such success is to incentivize consuming wealth rather than investing and growing and to deter other entrepreneurs from even trying to start businesses.

This is akin to dismantling productive machinery and redistributing the pieces as scrap metal. Although the wealthy are immediately affected, this confiscation reduces the quality of life for all income levels over the longer term.

Plundering the wealthy harms all of us.

Furthermore, tax hikes on the wealthy alone—or even on the upper-middle class—simply cannot adequately fund the massive government spending programs (ranging from $48 trillion to $92 trillion over 10 years) promoted by the left recently.

The government could confiscate every dollar earned (starting with dollar No. 1) by those with incomes of $200,000 or above and every penny of corporate profits and still raise only $32 trillion. And that presumes people and corporations would continue normal operations despite all their income being taxed away.

It’s no surprise that the average family disposable income in Germany is $11,000 less than in the United States.

In reality, the desire for power—rather than economic betterment—fuels the war on wealth.

Just as Ocasio-Cortez’s former chief of staff admitted the Green New Deal is about transforming America—rather than resolving a climate crisis—so the war on billionaires is a grab for economic control.

In the words of Ocasio-Cortez herself, “To be ethical if you’re a billionaire today the thing that you need to do is give up control and power … So, I don’t want your money, as much as we want your power.”

Communist revolutions of the past 150 years in Russia, China, Eastern Europe, Cambodia, and Cuba bear witness to the brutal impact of the most extreme agendas. The lackluster economies and high taxes across Spain, France, Greece, and Italy warn of the milder misery resulting from the softer tyranny of socialism. We must reject both. The war on wealth is a war on us all.

Joel Griffith is a research fellow in the Roe Institute at The Heritage Foundation.