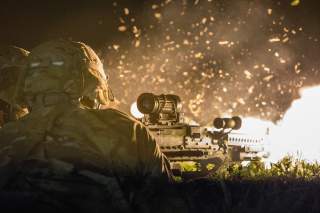 In 2014, having withdrawn from Iraq and looking to end its official combat mission in Afghanistan, the U.S. Army started to assess the impact of more than a decade of almost exclusively fighting insurgents and terrorists. In that time, it had trained its troops primarily for that mission and bought gear specifically for those nebulous conflicts.

But the world seemed to be getting more complicated and troops would need new weapons and gear to help deal with these threats. So, the ground combat branch went on a modernization blitz.

In December 2016, the Army released a “top 10” list of its modernization efforts. The programs ranged from vehicles to aircraft to individual weapons and medical equipment.

In March 2014, Russia seized control of Ukraine’s Crimea Peninsula. Moscow then began to supply tank and artillery support to insurgents fighting the government in Kiev, reigniting concerns about a potential conventional ground conflict in Europe between traditionally armed opponents.

Shortly thereafter, Islamic State spilled over from Syria into Iraq, kicking off a regional crisis. The group’s dramatic rise promised years of new, if limited fighting against terrorists in the Middle East and elsewhere.

Suddenly the Army found itself searching for tools to deal with what dubbed a “hybrid” of high- and low-tech foes. The enemy was often “elusive and ambiguous,” U.S. Army Gen. Daniel B. Allyn, the service’s Vice Chief of Staff, said on Oct. 27, 2016.

Legislators and experts routinely criticized the service for focusing too much on militants and terrorists. By 2017, it was true that the Army’s tanks, helicopters, mobile howitzers and rocket launchers and many other major systems were simply improved versions of decades old designs.

To be fair, the Army had been working steadily on improving its equipment since the end of the Cold War. However, it had suffered a number of high-profile setbacks in the process.

Between 1991 and 2010, the Pentagon had ultimately canceled the advanced Future Combat Systems armored vehicles, the deadly Crusader self-propelled howitzer and the futuristic RAH-66 Comanche stealth helicopter despite millions of dollars in existing investments. Congress-approved automatic budget cuts — a process known as sequestration — did not help matters.

But none of that meant America’s ground combat branch was standing still.

By 2016, the Army had endured nearly 30 years full of failed attempts to improve to its vehicle fleets — particularly the M-1 Abrams tank and M-2 and M-3 Bradley fighting vehicles. The biggest success story was the service’s purchase of the controversial Stryker wheeled armored vehicle.

In 2009, the Pentagon canned the ambitious Future Combat Systems program. At least on paper, that project promised the Army a whole suite of new tanks, armored personnel carriers and mobile artillery pieces.

In addition, wheeled drones would work with troops on foot. Attempts to salvage the infantry fighting vehicle portion to replace the aging Bradleys ran into still more difficulties.

So it was important for the service to close out 2016 making progress on a simpler project to finally replace hundreds of Cold War-era M-113 armored personnel carriers. The new Armored Multipurpose Vehicle — aka AMPV — held the potential to become a stepping stone to replacing other vehicles, including the M-2 and M-3.

In December 2016, defense contractor BAE Systems delivered the first prototype AMPV — effectively a version of the Bradley without a the gun- and missile-armed turret. Two months earlier, the Army had still not decided whether this particular type would be the basis for all of the variants it had in mind, according to a report by the Congressional Research Service.

Separately, the Army was working with General Dynamics and Kongsberg Defense Systems to give the lighter Stryker more firepower. The infantry versions of the eight-wheeled armored vehicles could carry only one .50 caliber machine gun or a 40-millimeter automatic grenade launcher.

Together, the American and Norwegian firms created the new Stryker Dragoon, featuring a fully-enclosed turret on top with a hard-hitting 30-millimeter cannon. Army commanders in Europe had specifically asked for the improved armament to counter potential Russian threats.

“The Russians, it turns out, had upgraded and fielded significant capabilities while we were engaged in Iraq and Afghanistan,” Allyn said at a General Dynamics’ facility in Michigan as the company debuted the new vehicle in October 2016. This presented an “unacceptable risk” for American troops.

At the opposite end of the spectrum, the Army was making progress on replacing the iconic Humvee light vehicles with a new, better protected truck called the Joint Light Tactical Vehicle, or JLTV. In March 2016, after nearly a decade of tests, trials and contract protests, the ground combat branch placed the first actual order for the vehicles.

Oshkosh’s winning vehicle was a derivative of its earlier M-ATV mine-resistant vehicle. If everything goes according to plan, the initial run JLTVs will come in four flavors, a utility version, a general purpose vehicle, a heavy machine gun carrier and an obtusely named “close combat weapons carrier” armed with the TOW anti-tank missile — that same basic missions existing Hummers perform.

Despite starting to purchase the new vehicles, the Army hopes to at least replace the traditional internal combustion motors in trucks like the JLTV in the near future. With improved engines, the Army could trim how much it has to spend filling gas tanks and reduce its reliance on oil-based fuels.

So, another top Army modernization effort in 2016 was a program to design a an experimental hydrogen-fuel-cell powerplant. With help from General Motors, the ground combat branch unveiled a test-bed truck with the prototype motor in October 2016.

New weapons for enemies at long and short ranges

So, in 2016, artillery troops were found themselves still riding around in the M-109A6 Paladin mobile howitzer — a derivative of a vehicle that first entered service in 1962. Despite a new upgrade program, allies and potential enemies alike were increasingly out-ranging American soldiers.

The same was true for their M-777 155-millimeter towed guns. The Army entered 2017 with existing work on a new, long-range gun barrel that it might be able to install on its existing weapons.

The prototype M-777ER — standing for extended range — can hit targets more than 40 miles away. This is more than twice the range of the existing weapon.

The modified cannon tube adds six feet and less than 1,000 pounds to the original setup. The Army expects the weapon will fit on the new M-109A7.

Engineers do still have some problems to solve. The extra length means the gun might flex, bend or break as crews travel from one location to another.

Also in 2016, the Army began the first major improvements to its hand grenades in four decades. The new weapon would give individual troops more options to take out enemies at closer ranges.

Unlike with existing designs, the Army wants soldiers to be able to switch the “enhanced” grenade from “defensive” to “offensive” mode depending on the situation. Traditionally, an offensive hand grenade creates only a shockwave rather than sending out deadly fragments, making it safer for troops to use as they advance, especially into buildings or other confined spaces.

Unfortunately, the Army’s retired its only offensive hand grenade in 1975. The weapon had a shell made from a composite containing the cancer-causing carcinogen asbestos.

And with the new weapon, “soldiers will not need to carry as many types of hand grenades,” Jessica Perciballi, the Army project officer leading the effort, said. “With the new multi-purpose grenade, they can carry one … and have the ability to choose either fragmentation or concussive effects desired for the situation.”

To meet the Army’s requirements, engineers worked on finding a shape that worked for both functions and would still be easy to carry. The rest of the design features could pose a challenge, as well.

While the Army is working on a new family of aircraft that might replace both helicopters and regular aircraft, in 2016, its aviators were still flying AH-64E Apaches and UH-60M Black Hawks. These were the latest versions of the gunships and transport choppers that had served troops since the 1980s.

Both helicopters use versions of General Electric’s T-700 jet turbine. After more than three decades of upgrades, the AH-64 and UH-60 are carrying much more gear than plane makers Boeing and Sikorsky might have originally expected.

The weight slows the helicopters down, makes them less maneuverable and and more vulnerable. It also just makes it harder for pilots to get the job done.

“Years ago, four Black Hawks could move a platoon,” U.S. Army Maj. Gen. William Gayler, head of the Army Aviation Center of Excellence at Fort Rucker, Alabama explained to the service’s reporters. “Now, it takes eight or nine and, by 2020 — assuming the linear weight increases continue at the current rate — it will take 15 to 20.”