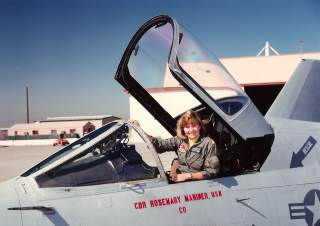 To honor the life and legacy of a female pioneer in Naval aviation, the U.S. Navy will conduct the first ever all-female flyover this Saturday, Feb. 2 in Maynardville, TN.

On Feb. 2, 2019 the U.S. Navy will bid farewell to its first female fighter pilot with its first all-female flyover.

During Mariner’s funeral on Saturday the U.S. Navy will perform its first all-female flyover, to honor not only her achievements but also her work as an educator and mentor – to female pilots in particular – during and after her naval career.

Naval Air Force Atlantic spokesman Cmdr. Dave Hecht told USNI News that the Navy had selected all female pilots to participate in this flyover, which is a first for the service, as well as one of two ground crew being female. Mariner had personally mentored some of the women involved in the flyover, he added.

Here’s the U.S. Navy’s statement regarding the flyover for retired Capt. Rosemary Mariner:

NORFOLK, Va. – To honor the life and legacy of a female pioneer in Naval aviation, the U.S. Navy will conduct the first ever all-female flyover this Saturday, Feb. 2 in Maynardville, TN. Officially referred to as a “Missing Man Flyover,” the tribute will be part of the funeral service for retired Navy Captain, Rosemary Mariner, who passed away on Jan. 24 following a long and brave fight with cancer.

After completing flight training in 1974, Mariner was designated a naval aviator and received her Wings of Gold to became the Navy’s first female jet pilot, flying the A-4E/L “Skyhawk” and the A-7E “Corsair II”. She also was the first female military aviator to achieve command of an operational air squadron. During Operation Desert Storm, Mariner commanded Tactical Electronic Warfare Squadron Thirty-Four (VAQ-34). In 1982, she reached yet another milestone by being among the first females to serve aboard a U.S. Navy warship, USS Lexington, and qualifying as a Surface Warfare Officer.

Mariner retired from the U.S. Navy in 1997 after obtaining the rank of Captain and logging seventeen carrier arrested landings, or “traps,” and completing over 3,500 flight hours in fifteen different aircraft.

The Missing Man Flyover is a special tribute honoring the service of aviators who have died serving their country. The maneuver features four aircraft flying above the funeral service in formation as one of the aircraft leaves the formation and climbs vertically into the heavens.

All of the aviators participating in the flyover are from squadrons based at Naval Air Station (NAS) Oceana and will be flying F/A-18E/F “Super Hornets.”