All the Ways to Cut The U.S. Defense Budget that China and Russia Would Love 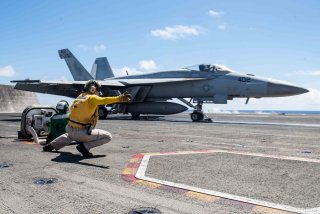 Almost weekly there is a new letter calling for impossible defense cuts that may make for good headlines but are actually poor policy borne on the backs of those in uniform. In order to be productive, this year’s defense budget debates demand a baseline reality check for increasingly vocal and aligned groups of policymakers and stakeholders who would see the military undergo steep cuts at a time when no other federal agency is on a fiscal diet. It is fair to ask the Department of Defense to find efficiencies in an over-$700 billion budget. However, suggesting the Pentagon could accommodate a 10 percent reduction to its budget is political theater—not realistic or responsible policymaking.

During the negotiations for the National Defense Authorization Act for fiscal year 2021, proposed amendments from Sen. Bernie Sanders and Rep. Mark Pocan to cut the defense budget by 10 percent were roundly defeated. Just last year, President Joe Biden’s Deputy Secretary of Defense Kath Hicks wrote that a 10 percent cut would render the U.S. a regional power, break U.S. alliances and partnerships, and increase nuclear proliferation. Yet the urge to beat a dead horse with a familiar stick is alive and well.

On March 16, 2021, the Defense Spending Reduction Caucus wrote a letter to President Joe Biden, advocating a “significantly reduced Pentagon topline.” Just over a week later on March 24, a coalition of organizations sent a separate letter to the leaders of the armed services and appropriations committees in Congress, citing the Defense Spending Reduction Caucus letter, and detailing a series of budget cut proposals for the Pentagon’s budget request for 2022.

Unsurprisingly, the coalition letter heavily relied on the Congressional Budget Office’s report, Options for Reducing the Deficit: 2021-2030. The most glaring challenge with leaning on this source, as discussed when the CBO originally published its option menu in December of last year, is that none of the program cuts were bound by (or moderately reflective of), with or to U.S. defense strategy objectives. Nor did the CBO discuss the consequences of such program tradeoffs, but it is obvious they would be steep. This is the opposite of strategy-based budgeting.

For proof, look no further than the struggling Navy. The coalition suggested reducing the naval component of the nuclear triad to eight submarines capable of launching ballistic missiles (SSBNs) and canceling all Ford-class aircraft carriers. Setting aside the projected savings estimations, the underlying strategic logic is tenuous for both proposals.

The value of the American aircraft carrier fleet has been debated in theory for fifty years. But in practice, the existing carrier fleet is in tremendously high demand and consistently overworked. Just this month, the Pentagon diverted a carrier from the Pacific to the Middle East to support Afghan troop withdrawals—leaving a gap in coverage of a critical region to national interests. While the coalition notes that several Navy secretaries have questioned aircraft carriers, review after review has validated the necessity of supercarriers. Indeed, to date none has been able to come up with a better alternative to meet unrelenting global missions. The idea to abandon carriers is devoid of strategic considerations. Moreover, it is a slippery slope. Why not stop building attack submarines? Or destroyers?

Presenting the reduced submarine fleet in a vacuum is also disingenuous. Should the Navy field just eight SSBNs, the United States would be undertaking a unilateral arms reduction beyond the terms of New START treaty with Russia, with wide-ranging implications for partners and allies, sending an undeniable signal to adversaries, and potentially undermining future arms control negotiations.

Proposed cuts to Air Force programs only exacerbate and compound these analytical failures. For example, concerning the land-based leg of the nuclear triad, rather than advising an assessment of the total cost differentials between extending the Minuteman III ICBMs yet again—if even possible—versus funding the replacement missile program, the coalition suggests merely punting the question past 2030. The group argues that development of the Ground Based Strategic Deterrent is premature, given “uncertainty over future force requirements and deterrence needs.” However, the low-end warhead arsenal required to achieve the cost savings assumed by the letter writers is based on an old Pentagon study from 2013 that found the United States could theoretically deploy just one thousand warheads and meet its deterrence objectives. No update to this tired study is publicly available.

On the F-35 Joint Strike Fighter, the coalition suggests the military simply stop buying fifth-gen fighters. That is not a serious option, as every testimony from senior Pentagon leadership indicates. Combatant commanders cannot maintain deterrence without stealthy tactical aircraft, full stop. Additionally, while House Armed Services Committee Chairman Adam Smith (D-Wash.) may want to “stop throwing money down that rat hole,” Congress should be concerned that the Russians and the Chinese are right behind us in the rat hole with their own fifth-generation aircraft comparable to the F-35 jet.

Further, gutting the bomber force by chopping the B-1B upgrade program and deferring the B-21 Raider does not mean that bombers will be in lower demand, particularly given their range and utility in the Indo-Pacific. Rather, it means the geriatric B-52 and B-2 fleets will just be driven into the ground faster. To keep the B-52 bombers flying, which are over sixty years old, the Air Force is already planning on an expensive and risky re-engining program. Taken together—accelerating the B-1’s path to the boneyard, delaying the B-21s, and relying heavily on a substantial B-52 crucial upgrade program—the group’s recommendations leave a bomber fleet already in crisis with no margin for error.

Conveniently, the authors note current bombers will be in service for another twenty years. But neither the B-52 nor the B-1B can get close to Chinese and Russian threat rings, which the B-21 is designed to do. Deferring the B-21 just means the military will be unable to meet many missions, period. Further, Smith recently said at an AEI event that the B-21 bomber is under budget and ahead of schedule. Why would anyone defer a necessary program that is actually doing well?

The coalition also wants to kill Space Force while the nascent service is still in the cradle. This new service was established in bipartisan legislation to meet shortfalls in an increasingly contested and critical environment. The standup costs associated with it have been quite small, with most of the service’s budget representing simple transfers of personnel and programs from the other services. It would be hard to find a recommendation that Beijing and Moscow would more wholeheartedly support given their own space prowess and warfighting investments.

Leaving no stone unturned, the coalition says that across-the-board 15 percent cuts to services contracting would be “judicious.” That’d be about as judicious as amputating your arm to address a small scrape. Managing entire categories of Pentagon spending, like services contracting, or weapons acquisition, or civilian personnel, is a repeatedly failed approach. Bipartisan lawmakers and administration officials admit that meat-cleaver cuts as an attempted management strategy were perhaps the most shortsighted choice of many made during the sequestration era.

Eliminating the Overseas Contingency Operations account is another false attempt at savings. Used as a workaround by the White House, Congress, and the Pentagon during the spending-constrained years of the Budget Control Act, this account contains dollars for base activities that are not covered under the annual topline, in addition to supporting the U.S. military’s global operations. Spending for contingency operations can be cut when those same operations require a lower level of effort. Anything else is simply wishful thinking and fake accounting. The coalition’s contention that “the Pentagon is not currently involved in any significant overseas contingencies” would be news to tens of thousands of service members currently deployed and engaged in overseas operations.

Still, perhaps most challenging is an underlying premise of advancing defense budget cuts at scale, as described by the Defense Spending Reduction Caucus. They claim, “significant cuts can be achieved without reducing the support, pay or benefits provided to our men and women in uniform and their families.” Providing servicemembers with benefits while short-changing them everywhere else—in terms of high operational demands for a smaller force, ignoring aging equipment, cutting training and risking overmatch—is a poor way to treat those few who are willing to serve and sacrifice. The idea that Congress can continue to increase pay and benefits while cutting everything else will create a hollow force unable to achieve its missions. What hurts servicemembers the most is being unable to do their jobs fully or well—which is exactly what happens when clickbait defense cuts are taken seriously.

Mackenzie Eaglen is a resident fellow for Security Studies at the American Enterprise Institute. You can follow her on Twitter: @MEaglen.