Almost Half of Americans Now Back Yang-Style Basic Income 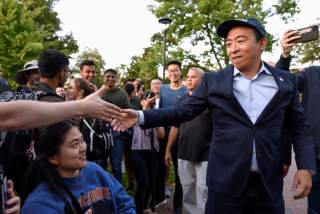 Americans are increasingly in favor of universal basic income (UBI), according to a Hill-HarrisX poll released Wednesday.

The national poll, which asked 1,001 registered voters whether they believe the “government should have a [UBI] program,” found that 49% are in favor of such a policy — up 6% from a similar poll released in February. Voters who oppose a UBI policy dropped from 57% in February to 51% in Wednesday’s poll.

Support for universal basic income (UBI) is on the rise, according to a new Hill-HarrisX poll https://t.co/b3Tf4N2VfU pic.twitter.com/TOJGAcGBWE

Young voters, however, remain largely more in favor of a UBI program than those older than 65. Among voters between the ages of 18 and 34, 72% were in favor of UBI. By contrast, only 26% of voters over 65 expressed support for such a program.

Among political parties, 66% of Democrats compared to 30% of Republicans and 48% of independents were in favor of UBI.

The findings come as Democratic 2020 presidential candidate Andrew Yang, who is campaigning largely on his UBI policy idea called the “Freedom Dividend,” is tied in sixth place with four other Democratic candidates for most likely to win the nomination.

Yang announced 10 giveaways of $12,000 in his opening statement during the third Democratic primary debate in Houston, Texas, on Sept. 12, earning laughs from his competitors.

“My campaign will now give a freedom dividend of $1,000 a month for an entire year to 10 American families — someone watching this at home right now,” Yang said. “If you believe that you can solve your own problems better than any politician, go to Yang2020.com and tell us how $1,000 a month will help you do just that.”

“This is how we will get our country working for us again, the American people,” he added.